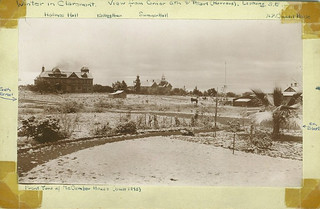 On June 22, President Ferguson was elected by the Board to be a trustee of the College and a member of its Executive Committee. At the next Board meeting, Henry Bent resigned from the presidency of the Board, and Ferguson was elected to succeed him, thereby becoming chairman of the Executive Committee at the same stroke. This consolidation of power was not unusual in higher education at the time—at both Harvard and Brown, the president of the college was also the head of the Board. However, Ferguson’s businesslike administrative approach soon brought him into as series of conflicts with the faculty that would contribute to his downfall as president.

During one of several brief disappearances of the Men’s Glee Club during Pomona’s early years, it was replaced in 1898 by a “Male Quartette.”

Requirements for “worship” were added to the College’s regulations in 1898, with all students expected to be present in the chapel every morning except Saturday, when attendance was voluntary.

The 1899 Metate (published in 1898) includes the Vacation Whisker Club, a group of men who grew their facial hair out during summer and winter vacations.

The assets of Pomona College in June 1898, according to President Ferguson’s report for the year, totaled $187,000, including an endowment of $100,000, village lots in Claremont worth $12,000, and a $25,000 pledge from Dr. Pearsons for the new Hall of Science. Also this year, the College Catalog makes its first mention of annuities, for which the income is not yet available, including $4,000 for the Rev. James T. Ford Fund for students of limited means; $2,000 for the Mrs. J.D. Potter Fund for students preparing for the ministry; and $2,000 for the Mrs. Loraine H. Page Fund for student of limited means.