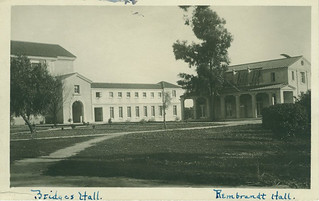 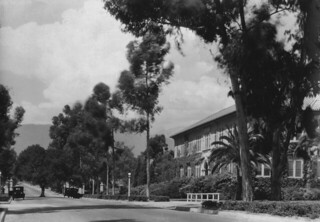 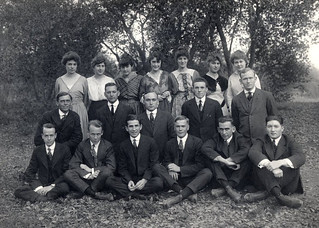 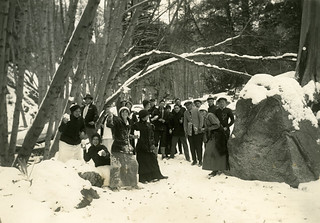 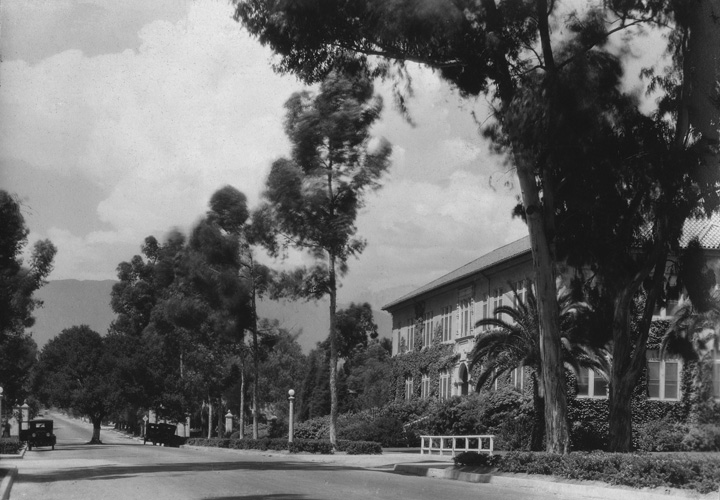 Enrollment increases prompted a major building program in the first years of the new century that culminated in the remodeling of Holmes in 1916, supported in part by a further gift from Esther R. Holmes, during the tenure of President James Blaisdell. Although other buildings existed by now, Holmes remained the principal instructional facility, containing humanities and social science classrooms as well as administrative offices. The now-inadequate, original wood building was transformed, as Claremont (Sumner) Hall was soon to be, into a tile-roofed stucco structure, Mission Revival in style, that harmonized with its neighbors: Carnegie, Smiley, Rembrandt and Little Bridges. The chapel, which continued to be used for student gatherings, was nearly doubled in size and given a stage and two music/dressing rooms. At the same time, the entrance was moved to the west side (College Avenue), relating the building more effectively to the College’s Gate at Sixth Street that had been installed in 1914. As reincarnated, Holmes lasted more than 70 years and proved so successful that architect James P. Jamieson and his associates, of St. Louis, became the College’s supervising architects.

In accordance with the “Preparedness” program championed by President Wilson, the faculty approved an elective military course in early 1916. Later in the year, after the U.S. declaration of war, the male students were formed into three companies for military drill, plus a Red Cross corps. For drilling, all they had available to them were 30 breech-loading muskets that had seen use in the Indian Wars.

After limiting the creation of new sororities for a couple of years, the faculty voted in 1916 to discontinue the one existing sorority, Sigma Beta Eta, by forbidding it to elect new members, and to prohibit the formation of future sororities. Fraternities, however, were allowed to continue.

The 1917 Metate (published by the junior class in 1916) included the “Waiter’s Union,” which employed male students as waiters working in the dining halls, serving other students at meals. Employment by the Waiter’s Union was an important way for many students to put themselves through college.

Eugene Nixon is hired as an assistant professor of physical education to coach most of the athletic teams. Most notably, he would serve as Pomona’s football coach until turning it over to Earl “Fuzz” Merritt ’25 in 1935.

On June 1, Howry Warner 1912 and Mary Roof 1912 became the first of many alumni couples to be wed in Little Bridges over the years.