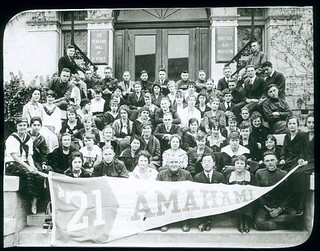 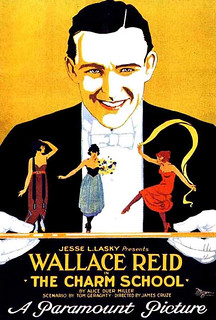 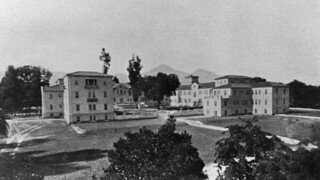 Harwood Court, shortly after its 1921 construction
8 years ago by Pomona College 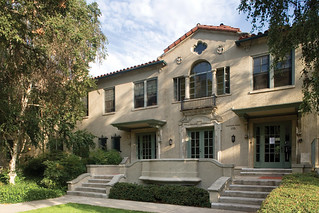 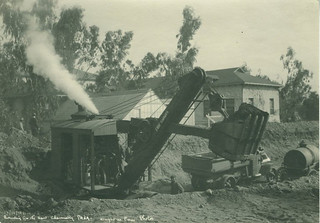 Construction of Mason Hall, which began in 1921
8 years ago by Pomona College 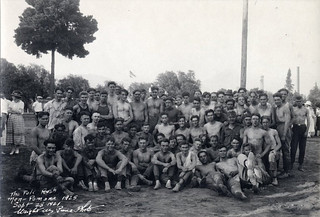 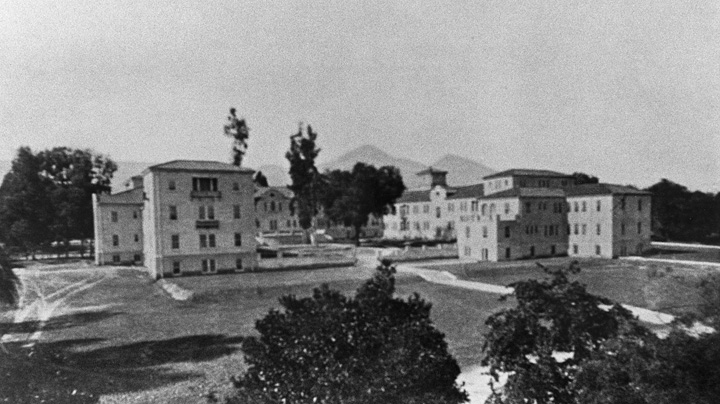 Due to the growth of the College and the resulting increase in student records, Charles Tabor Fitts, assistant professor of English since 1919, was appointed as the College’s first full-time registrar in 1921.

Completed in 1921 and housing 135 students, Harwood Court replaced Sumner Hall as the primary residence for the College's women. Male students had been housed in Smiley Hall since 1908, and, by 1917, enrollment increases and growing concerns about the safety of wood-frame Sumner Hall led to the decision to construct a women’s dormitory. Although construction was postponed because of the war, the site—between First and Third streets, east of College Avenue—along with additional land, was acquired by 1919. Construction costs were supported in part by a $50,000 donation by Trustee C.E. Harwood. Income from room rents, then $125 per student, were expected to offset expenses over time. Construction of the easternmost wing was made possible by a gift from businessman Schuyler W. Strong. The dormitory was named in memory of Harwood’s late wife Catherine Henry Harwood, and the east wing was named for Strong.

By September 1920, 100 rooms were ready for students. Completed in February 1921, the building immediately became the center of women’s life on campus.

Architecturally, Harwood Court’s three simple blocks, enlivened by ornamental detail, reflected the influence of Myron Hunt whose signature blend of classicism and Southern California regionalism could be seen in Bridges Hall of Music and adjoining Lebus Court. The large, landscaped courtyard that lay behind Harwood’s Palladian entrance façade integrated the interior and exterior spaces, taking full advantage of the local climate and distinguishing Harwood from the majority of Pomona’s earlier buildings, whose closed plans were derived from Eastern and Midwestern collegiate models. The elegant design also contrasted with the relative austerity of Myron Hunt’s Smiley Hall (1908) and Sumner Spaulding’s later Clark men’s dormitories (1929), demonstrating an association of style with gender. As architect Robert A.M. Stern has noted, Harwood’s handsome courtyard, with its fountain filled with goldfish and water lilies, also reflected an “appreciation of physical fitness and outdoor living that was one of Southern California’s great contributions to American life.” The building’s dedication in February 1921 was part of a larger celebration of the 10th anniversary of James Blaisdell’s presidency.

To honor Pomona’s founders, President Blaisdell instituted the celebration of Founders Day on Oct. 14. As part of this observation, the “Ceremony of the Flame” was created as a symbolic ritual, with the passing of a flame from candle to candle in a darkened hall, followed by the singing of College songs.

Following the war, there was increased lobbying from the students for an end to the requirement that all students attend church each Sunday. President Blaisdell resisted this call for some time, telling the Board that he wished to retain the requirement until the College could establish a Department of Religious Education. In the spring, the new professor of religious education was hired, and on Oct. 27, the Board voted “that the present rule regarding required church attendance be changed, and that church attendance be placed on a voluntary basis.”