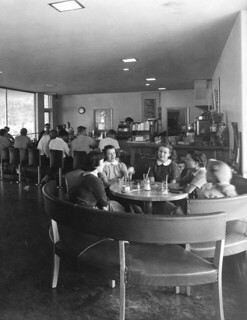 Edmunds Union in 1951
8 years ago by Pomona College 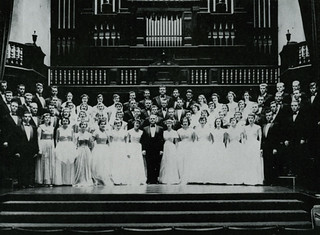 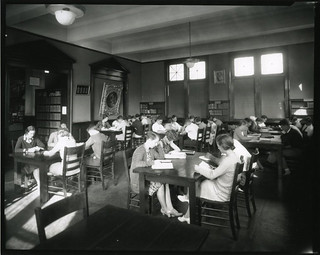 Students studying in the reading room of Carnegie Library, circa 1951
8 years ago by Pomona College
Submit a Photo

KPCR, Pomona’s first student-operated radio station, began broadcasting in 1951 as a tiny AM station housed in a closet in Edmunds Union. Its programs could only be heard on campus, and the station went off the air after four years, when the FCC objected to “carrier-current” stations in the U.S. In 1956, radio at Pomona took a big step forward with the founding of KSPC, an FM station that broadcast first from Replica House and later from studios in the basement of Thatcher Music Building.

In 1951, Pomona agreed to limit enrollment to about 1,000 students; Claremont Men’s College restricted its student body to 350; and Scripps was allowed to expand to 325.

Rancho Santa Ana Botanic Garden (RSABG) moved from its original location in Orange County to Claremont and become affiliated with The Claremont Colleges in 1951. The Garden was founded by Susanna Bixby Bryant in 1927 on 200 acres of her family’s Orange County ranch as a place for research, study and appreciation of native California flora.

Relman (Pat) Morin ’29 won the first of two Pulitzer prizes as a reporter for the Associated Press reporting on the Korean conflict in 1951. He would go on to win his second in 1958 for his reports on rioting over school integration in Little Rock, Arkansas.

An educator and diplomat, Julian Nava ’51 was appointed by President Jimmy Carter in 1980 as the first Mexican American to serve as ambassador to Mexico. Nava, who was a professor of history at California State University, Northridge, for more than 40 years, became the first Latino to be elected to the Los Angeles Unified School District Board of Education in 1969.

Roy E. Disney ’51, who was vice chairman and head of the animation department for Walt Disney Studios, was the son of Roy O. Disney and nephew of Walt Disney, co-founders of the company. After graduating from Pomona, Roy E. Disney got his start as an assistant editor for True-Life Adventure Films and a writer for the Wonderful World of Disney and Zorro. Under his tenure as animation head, Disney produced the box-office hits Beauty and the Beast, The Lion King and The Little Mermaid.