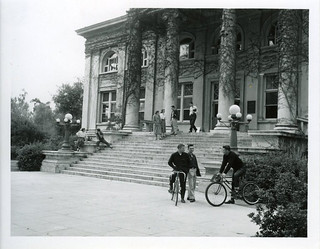 Carnegie Hall, shortly after it was renovated in 1953 for classrooms and faculty offices
8 years ago by Pomona College 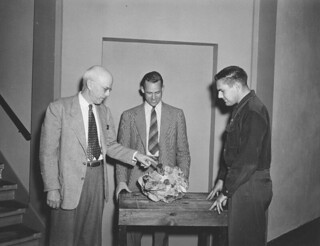 Dr. A. O. Woodford, John Shelton and Cortez Hoskins '53 examine a large gemstone loaned to the Geology Department by Thomas H. Warner, Jr., in 1953
8 years ago by Pomona College 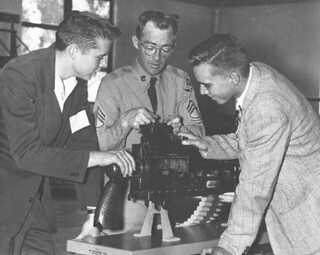 Despite the increase in enrollment, there had been no classroom construction at the College since 1925. With the library having moved to Honnold, that need for more space was met by remodeling the former Carnegie Library into a classroom and office building for the social sciences. The renovation was completed in 1953 at a cost of $75,891.

Pomona’s first class in computing was given to 52 students by Professor Chester Jaeger.

The football team won the first of a record 12 straight games, including an 8-0 undefeated, conference-winning season in 1954. The team also won conference crowns in 1953 and 1955.

A trailblazing civil rights attorney who fought for the rights of farm workers, Cruz Reynoso ’53 became the first Latino on the California Supreme Court in 1982. Professor of law emeritus at the University of California, Davis, Reynoso also was a law professor at the University of New Mexico and the UCLA School of Law. In 2001, he served as vice chair of the Civil Rights Commission, leading the only official investigation into voting irregularities in the Bush v. Gore presidential election. He was awarded the Presidential Medal of Freedom in 2000 by President Bill Clinton.

The UNIVAC 1103 became the first commercial computer to use random access memory.