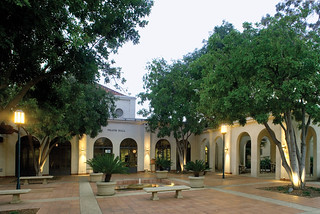 Frank Dining Hall, completed in 1982
14 years ago by Pomona College 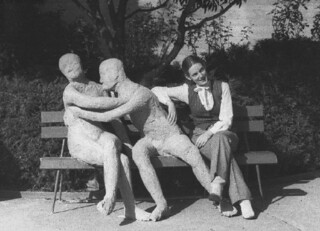 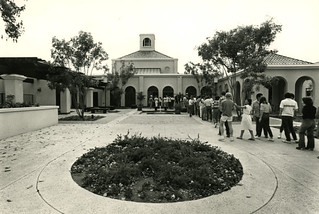 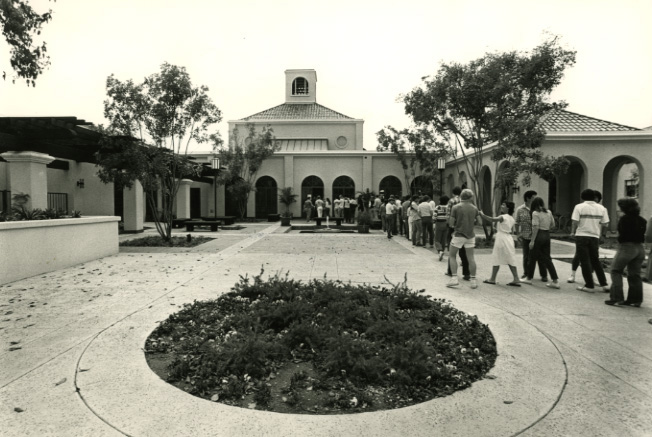 Frank Dining Hall was the cornerstone of a complex of projects proposed in the College’s Centennial Plan that was adopted in 1978. Announced in July 1980 and completed two years later, it replaced two smaller dining rooms—Harwood (built 1931) and Gibson (1949). The site was selected in part out of a desire to create a new center of student life on the south campus. The building was designed to seat 460 in large and small groups and including outside tables in settings intended to promote social interaction. The 19,600-square-foot Frank Hall joined Frary Hall and Oldenborg Center as the College’s dining facilities, and the hope was that it would help link north and south campuses.

The family of Richard N. Frank ‘46, trustee, and Mary Alice Bentley Frank ‘47 has long been associated with Pomona College. Their interest in sponsoring a dining facility was a natural outgrowth of Richard Frank’s experience in the food industry. At the time the building was constructed, he was president and CEO of Lawry Foods, Inc., a large and highly successful business originally based on the production of a seasoning salt concocted by his father, Lawrence L. Frank, for use in the family restaurants; Richard Frank ultimately expanded the company to include over 100 specialty food products.

The architecture and landscaping of Frank Hall were inspired by innovative design approaches developed at what was then known as Lawry’s California Center (now the Los Angeles River Center and Gardens), a 12-1/2–acre complex of corporate headquarters, gift shops, restaurants and manufacturing operations located at the confluence of the Arroyo Seco and the Los Angeles River, where the Golden State and Pasadena freeways intersect. Although the arched colonnades, cloistered courtyards and lush gardens of Lawry’s Center resembled an historic Spanish-style estate more than a corporate headquarters and manufacturing facility, it was up-to-date in functional detail. Likewise, Frank Hall was constructed with attention to energy conservation: the skylight around the central tower reduced the amount of electricity needed; large windows provided natural ventilation and heating; and hot water was provided by solar technology.

The second Renwick Gymnasium, originally constructed during World War I as a barracks for the Student Army Training Corps, was dismantled. The famously woodpecker-riddled and bee-infested structure (sometimes referred to as "Woodpecker Heaven"), then located east of Bridges Auditorium, had been declared unsafe by the Los Angeles County Fire Department. Replaced by Memorial Gym, the old structure had been used most recently for volleyball, fencing, social dance, martial arts and intramural sports.

During the summer of 1982, the portions of Pomona’s north-campus residence halls known as Clark I and Clark V underwent a renovation costing more than $1 million each. Included in the work were new plumbing and wiring, a new heating system, a new roof and a range of safety features.

After the construction of Frank Hall in 1982, Gibson Dining Hall was converted to a computer lab and the Pomona Student Art Gallery, and later to dormitory rooms.

In response to the energy crisis, Pomona agreed to be one of a dozen institutions to demonstrate a new program to slash energy as part of a joint project of the Higher Education Energy Task Force and the Educational Facilities Laboratories (a division of the Academy for Educational Development). The three main components of the plan were a computer-based energy information management system, an organizational structure and planning model for the physical plant department and the institution as a whole, and options for financing energy management and conservation solutions.

May of 1982 saw the retirement of four of Pomona’s faculty legends, each with more than three decades of service to the College: Professor Vincent H. Learnihan in history, Professor William F. Russell in music, Professor R. Nelson Smith in chemistry and Professor Elmer Tolsted in mathematics. Learnihan, who taught at Pomona for 33 years, had a reputation as an uncompromising taskmaster who was known to lock the door to keep students who arrived late from entering. Russell was a beloved member of Pomona’s music faculty for 31 years, including 29 years as chair of the department. Smith, described by one of his colleagues as a “heavenly devil,” was known as a prankster of mythical proportions during his 31 years in Pomona’s Chemistry Department. Tolsted was known as both a mathematician and an accomplished cellist during his 35 years at Pomona.

Actor Jack Lemmon was on campus in 1982 for the filming of Mass Appeal, in which he plays an embattled Los Angeles priest.

The L.A. Weekly rated KSPC, Pomona’s FM radio station, as one of the top three stations for local music, saying it “blended the best independently released records, both local and imported, with particular attention to local talent.”

On Founder’s Day, President David Alexander announced “The Centennial Campaign” would seek $80 million for faculty support, scholarships and financial aid, capital improvements and operating expenses. In the end, the campaign brought in a record $135 million and led to the construction of the Rains Center, Frank Dining Hall, Seeley Mudd Science Library and eventually, after a number of delaying legal battles, Hahn Hall.

The former premier of France, Raymond Barre, spent two days on campus in November, giving a speech on “Europe and the United States: Cooperation and Conflict.”

The Falklands War began with Argentina’s invasion of the British-ruled Falkland Islands and ended two months later with the formal surrender of Argentine forces.

The first compact discs (CDs) were released to the public in Germany.

The Vietnam Veterans Memorial was dedicated in Washington, D.C.