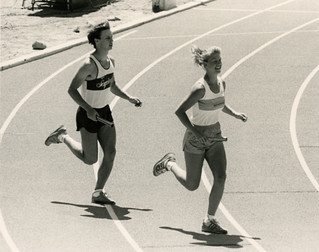 Jerry Irish, provost and professor of religion at Kenyon College, became the new vice president and dean of the college at Pomona in July, succeeding Dean Robert Voelkel, who resigned to return to teaching.

In April, the new, bright blue Robert Strehle Memorial Track was dedicated, a gift from H. Russell Smith ’36, President of the Board of Trustees. The track was the first phase of a plan to enlarge and modernize Pomona’s physical education and recreation facilities.

The first language resident for Japanese (Yumiko Ichise) was hired for the Oldenborg Center, in preparation for adding Japanese to the other five languages—Chinese, French, German, Russian and Spanish—represented by language sections of the Center’s residence hall.

In recognition of his efforts to enhance U.S.-Japan relations through his work in Kabuki theatre, Professor Leonard Pronko was decorated with Japan’s Order of the Sacred Treasure, Third Class. The award is Japan’s highest cultural honor.

Pomona received as a gift one of the largest private collections chronicling the history of theatre from the 17th century to modern times. The Norman D. and Geraldine Womack Philbrick Library of Dramatic Arts contained more than 10,000 items, including a Second Folio and Fourth Folio of Shakespeare’s plays, from 1632 and 1685, respectively, as well as a wide range of books, pamphlets, theatrical commentary, playbills and holographs. The decision was made to house the collection in Honnold Library.

In 1986, Pomona College was notified that it was to receive a gift of more than $40 million, the largest in its history. Nearly as remarkable as the sum was the fact that it came as a complete surprise from a donor no one on campus appeared to have known. Similar astonishing disclosures were received elsewhere—Caltech, Stanford, Loyola Marymount, the Hospital of the Good Samaritan in Los Angeles, and The Menninger Foundation in Topeka, Kansas. All found themselves named in the will of Liliore Green Rains, who had died in November 1985 leaving a total of over $250,000,000 to be divided equally among the six institutions. The gift was used to build the new Rains Center and boosted the Centennial Campaign far past its original goal of $80 million.

Students marched outside Pomona’s Career Placement Office to protest the recruiting of students by the Central Intelligence Agency.

Actor Sylvester Stallone spent two days on campus as Pomona College was cast as a military academy in Stallone’s film Over the Top.

Celebrated Mexican novelist, playwright and diplomat Carlos Fuentes was the featured speaker at Pomona’s 93rd annual commencement ceremonies in May. “When virtue is associated with success, wealth and power, it can easily lead to arrogance and ignorance,” Fuentes told his audience. “”We can become experts in virtue—what is good and bad—and ignoramuses in values—the relationship between my reason and that of my opponent. North Americans especially love to have reliable villains, white hats and black hats. Sometimes it is too complicated to admit that others may have values just as important as our own, even if, or precisely because, they are different from our own.”