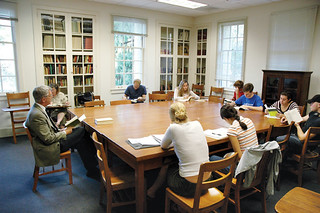 A 2004 Classics class with Professor Richard McKirahan in the newly renovated Crookshank Hall.
16 years ago by Pomona College 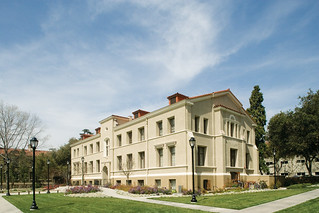 Crookshank Hall after its 2004 renovation.
14 years ago by Pomona College 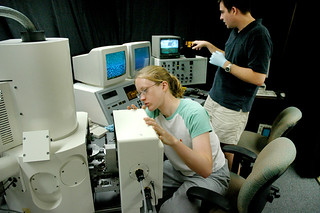 Kristina Bajema ’06 and Chemistry Professor Chuck Taylor prepare to use the new field emission scanning electron microscope in 2004.
16 years ago by Pomona College 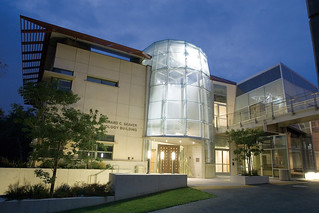 Seaver Biology Laboratory, built in 2004
15 years ago by Pomona College 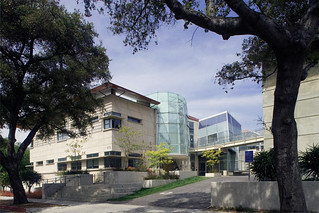 Seaver Biology Laboratory, built in 2004
14 years ago by Pomona College 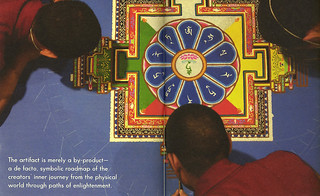 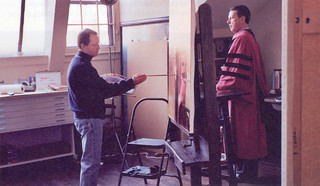 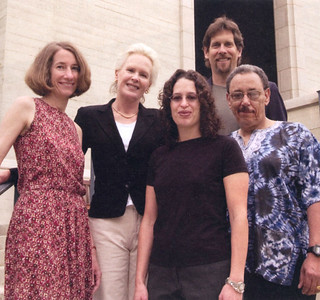 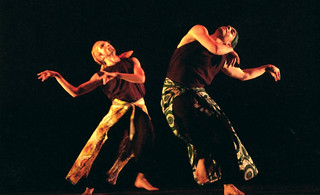 A dance performance, "In the Arena," Daniel Senning '01 and Jerrad Roberts '01 -- two recent science graduates -- performed at the Spring Dance Concert.
8 years ago by Pomona College 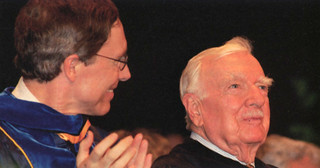 President David Oxtoby with Walter Cronkite during the 2004 Commencement ceremony.
8 years ago by Pomona College 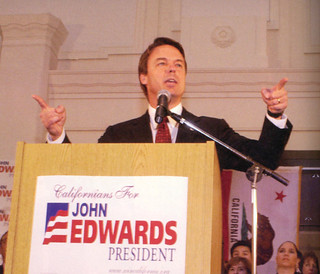 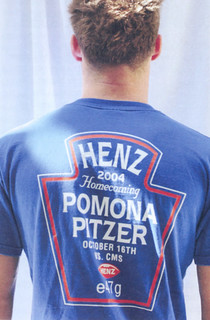 The 2004 Homecoming t-shirt
8 years ago by Pomona College 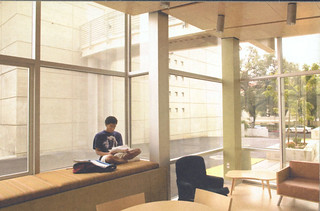 A student studying in the Student Lounge in the newly built Richard C. Seaver Biology Building dedicated in 2005
8 years ago by Pomona College 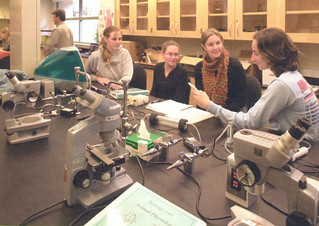 Students in Professor Jonathan Wright's Animal Physiology class working in the teaching laboratory in the newly built Richard C. Seaver Biology Building, which was dedicated in 2005
8 years ago by Pomona College
Submit a Photo 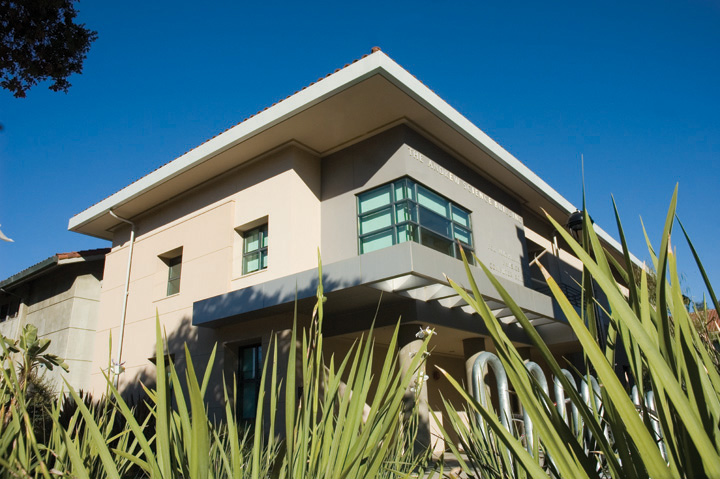 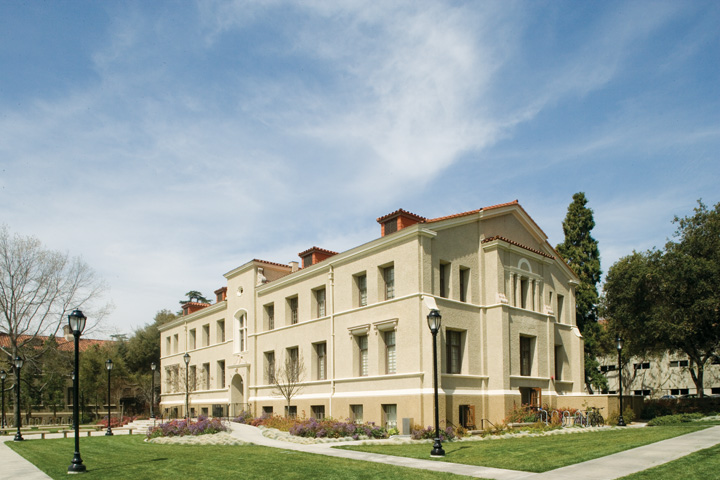 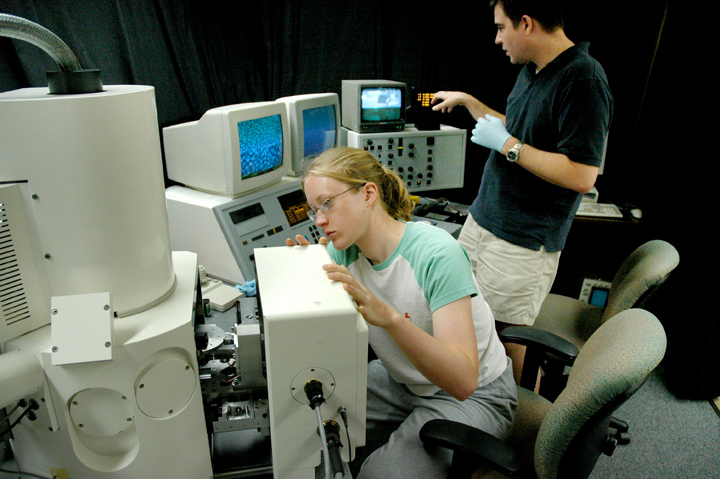 Like the Andrew Science Hall, the Richard C. Seaver Biology Laboratory, which replaced the Thille Botany Building, was the product of dramatic changes in the teaching of science and the resulting need for facilities that would serve an evolving curriculum. According to Professor David Becker, who was heavily involved in planning the new building: “Even 20 years ago, biology was largely a descriptive body of knowledge that students had to memorize. Today, students learn through experiments how something works or came to be. Courses emphasize student application of scientific inquiry, reading what’s known, designing a hypothesis, doing experiments, and analyzing their own data. This all starts in the freshman year. In the 1950s, molecular biology didn’t even exist.”

Along with spaces designed for student-faculty collaboration, an important goal of Pomona’s new, 46,270-square-foot biology building was to provide state-of-the-art research and teaching labs for genetics, cell biology, neurobiology, plant and animal physiology, and ecology. Another was to entice non-science students, and to this end, the architects designed inviting entrances and laboratories visually accessible to passers-by. If the response of Professor of English Arden Reed is indicative, this strategy is successful. Asked about the newly completed building, he replied “It makes me want to be a biologist.” Anchoring the campus on its western edge, Seaver Biology will, it is hoped, infuse the campus with a sense of excitement about science. Landscaping along Sixth Street and Harvard Avenue was reconfigured to improve day-lighting and to create outdoor spaces that encourage “chance encounter and contemplation.”

Appropriate to its focus, Seaver Biology is a “green building,” meaning that it is both energy efficient and “friendly” to the environment. To make the building green was not inexpensive—an additional $1,260,000 was required—but well worth the investment. The building’s silver certification by the United States Green Building Council places the Seaver building in the top five percent of all academic laboratory buildings in the country in terms of energy-conscious design.

In 2004, Crookshank was again renovated as part of a $4.9 million project including the new Seaver Biology Laboratory and an updating of Mason Hall. While the large-scale changes to the building included seismic upgrades, an elevator, and new utilities infrastructure, students and faculty responded particularly to the sensitively restored interior of the building. Spacious faculty offices (larger than any on campus) were equipped with floor-to-ceiling wooden bookshelves, complete with rolling ladders, and the Mulhauser Seminar Room quickly gained fame for its gargantuan, 12-foot diameter table.

The Biology, Geology and Physics departments, in collaboration with the Keck Graduate Institute, obtained a new field emission scanning electron microscope (FE-SEM), a piece of equipment used in state-of-the-art research labs across the country. The $250,000 microscope was installed in Millikan Laboratory.

Another Call to Action

Students organized under the leadership of the Pomona College Women's Union and SLAM (Student Liberation and Action Movement) to write a new version of the "Call to Action" first published in 1996 by students of color of The Claremont Colleges. Like the first Call to Action, the new one was intended to call attention to instances of hate speech and intolerance and to call on the Colleges to work to resolve these issues and improve the campus climate for students who had been made to feel marginalized.

Hate Speech and a Hoax

Students from all of The Claremont Colleges came together in solidarity in response to a rash of incidents of hate speech and racial insensitivity, with all five undergraduate institutions canceling classes for a day on March 10 to encourage students and faculty to take part. This combined stand against real hate speech was complicated when one high-profile incident that sparked the day of dialog—the vandalism of a car belonging to outspoken CMC Professor Kerri Dunn—was determined to be a hoax, resulting a year later in Dunn’s conviction and a one-year prison sentence for filing a false police report.

The Princeton Review ranked Pomona College students the happiest in the nation. A year earlier, they had been ranked second in that list.

Renowned broadcast journalist and anchorman Walter Cronkite gave the commencement speech for the graduating class of 2004.