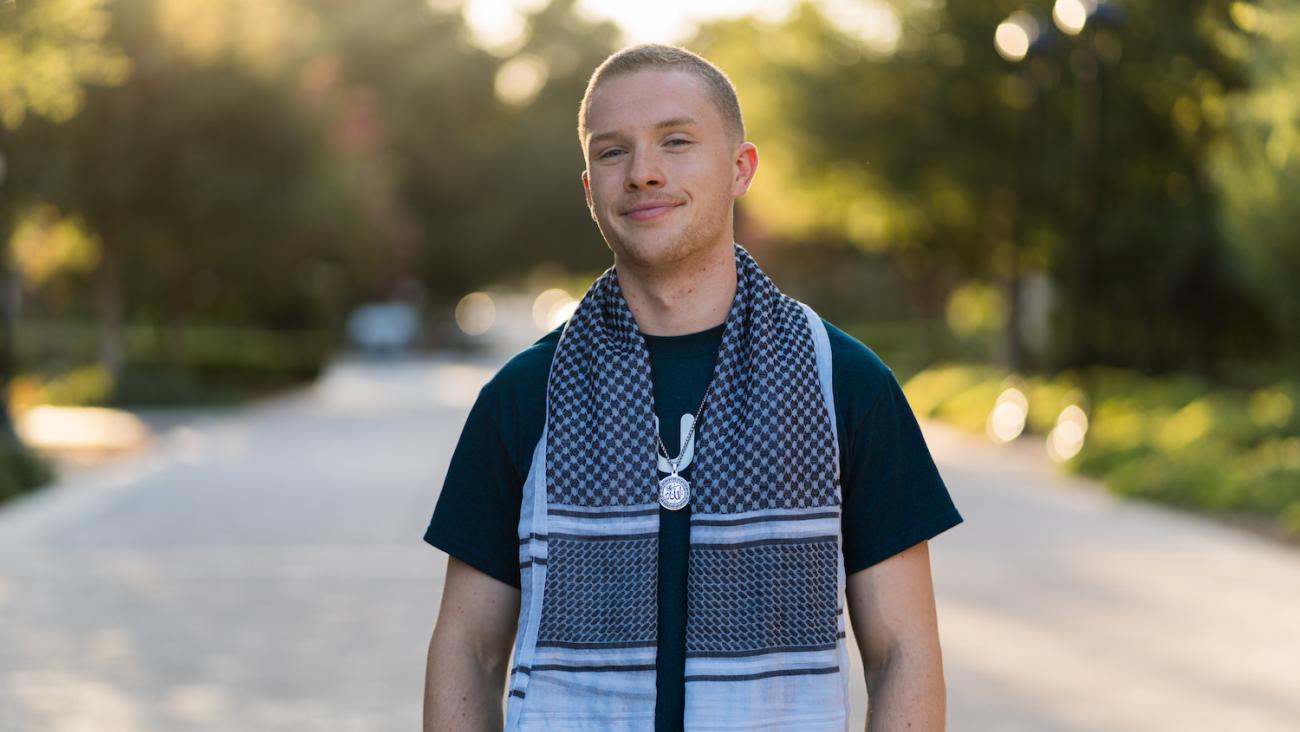 Paul Kiefer’s journey of faith and inquiry already has taken him great distances.

An American Muslim from Seattle who converted as a teenager, Kiefer ’20 studied abroad in Morocco during his junior year to experience the Arabic-speaking Muslim world. Back home in the United States, he looked toward the American South as he prepared to write his senior thesis in history.

There, he was an outsider of a different sort, a white Muslim gathering oral histories and conducting research on the Southern Black Muslim community that emerged in North Carolina in the 1950s and has grown deep roots in the Tar Heel State—a place where the festival of Eid is sometimes celebrated with fried fish and grits.

“They’re doing it right, the whole Southern thing,” says Kiefer, who was partly drawn to the region because of his family’s history there, though his relatives were not Muslim.

The Black Muslim community in North Carolina that was first planted by the Nation of Islam and later gravitated toward the teachings of W. Deen Muhammad is the subject of Kiefer’s thesis, "A Crescent Moon Rises in Dixie: The Foundation and Development of a Southern Black Muslim Community, 1955-1985."

“Paul is writing about a topic few historians have investigated. So his work is filling a gap in our collective understanding of the Nation of Islam in the South,” says Tomás Summers Sandoval, associate professor of history and Chicana/o-Latina/o studies. “The archival work he’s done so far is already helping to write that history.”

Kiefer’s research weaves source material such as mosque records and contemporary newspaper reports with oral history interviews he conducted in North Carolina during a Summer Undergraduate Research Program project before his senior year.

An aspiring radio journalist, Kiefer made broadcast-quality recordings of his interviews and hopes to create a public archive provided he receives permission from his subjects. While Kiefer was in the South, he also secured a part-time summer internship at WUNC, a North Carolina public radio station, where he contributed to radio reports and website articles on local life while working on his academic research.

Kiefer’s conversion came at age 14 after a period of what he calls “really nasty bullying” by classmates in middle school.

“These two new kids from my high school who were both Ethiopian, a brother and sister, came up to me realizing that I needed some friendship and guidance or what-not, and offered to be my friends,” he says. “It turned out the people who were the first to really embrace me were two Muslims, and I love them dearly for it.”

So began a spiritual path he continues to follow as co-president of the Muslim Student Association of The Claremont Colleges. His commitment to his faith is strong, though often only subtly signified.

“I wear a chain with the name of God on it, and that’s my bat signal,” Kiefer says. “That’s something I picked up when I went to Morocco. Beyond that, I don’t visibly mark myself as Muslim.”

His academic curiosity about Southern Muslims was sparked by an article by Youssef Carter, now a scholar at Harvard University, about a small museum exhibit on the oldest mosque in North Carolina, the Ar-Razzaq Islamic Center in Durham.

“I hadn’t really given a lot of thought to the presence of Black converts in the South; they’re usually associated with the North,” Kiefer says. “When I was thinking of thesis topics, I turned back to that article and then went digging through The Claremont Colleges Library and all the various online resources on American Muslim history I could find. I found pretty much nothing on the Islamic South, at least in the 20th century, so I thought this might be my starting point. They have a museum exhibit on them. They have these people I could contact. There’s this Harvard professor who has written about them. This is a point of entry.”

Kiefer planned to contact Carter—at that time a visiting professor at the University of North Carolina at Chapel Hill—when he arrived in the state. Before Kiefer had time to set up a meeting, he bumped into him at a mosque. Carter became a mentor, along with Kiefer’s thesis readers, Summers Sandoval and Helena Wall, the Warren Finney Day Professor of History.

Islam’s Long History in the South

Though there are more and more Muslims in North Carolina with roots in the Middle East, North Africa or Asia, Kiefer focuses on Black converts and their children. He is studying how the community evolved as the Nation of Islam split in the 1970s into a group led by Louis Farrakhan and those who followed the Orthodox Sunni teachings of W. Deen Muhammad.

Kiefer says he is indebted to the work of Sister Naomi Feaste, a community historian for Ar-Razzaq as well as the As-Salaam Islamic Center in Raleigh. Her research is the foundation he has built on by adding more than a dozen other oral history interviews, studying contemporary reports and delving into temple financial records and a North Carolina State Bureau of Investigation file involving the Durham mosque.

Kiefer says he is exploring Black migration, businesses and the community’s efforts to achieve autonomy while also seeking to show “a series of Muslim organizations trying to navigate the South during the Civil Rights Movement at the same time as Christian organizations can provide an interesting point of comparison,” citing the Southern Christian Leadership Conference led by the Rev. Martin Luther King Jr.

Among other connections: Civil rights activist Floyd McKissick, the leader of the Congress of Racal Equality, or CORE, was also the attorney for the Nation of Islam temple in Durham.

“We often think of Islam in the U.S. as a present-day story but Paul’s work is a reminder of the importance of both Islam and Muslims to the U.S. past,” Summers Sandoval says. “At the same time, his work helps us better understand the roles various congregations and faiths played in the mid-century quest for Black liberation and autonomy in the South.”

Kiefer also learned that Islam was not truly new to the South when it was imported from Northern cities such as Philadelphia and Baltimore in the second half of the 20thcentury. He found records of Black Mosques in the South as early as 1928 and a Black Muslim farm by 1943, though those groups were members of the Moorish Science Temple of America, not the Nation of Islam.

“About 15 to 20 percent of enslaved people in what became the United States were Muslims,” Kiefer says. “There are many well-documented examples of Muslims who practiced openly, who ran Friday prayers on plantations, who wrote letters home. At least three actually wound up going back to West Africa thanks to letters they wrote home in Arabic.”

The history of Muslims in the South is a story worth telling, and Kiefer plans to tell many more. He has applied for a Fulbright-National Geographic Storytelling Fellowship and the NPR Kroc Fellowship, both designed to develop journalists as well as storytellers in other mediums. While awaiting fellowship announcements in the spring, Kiefer also plans to apply for public radio jobs, pursuing his determination to uncover little-known stories and histories.

“The dream would be to work for NPR,” he says.