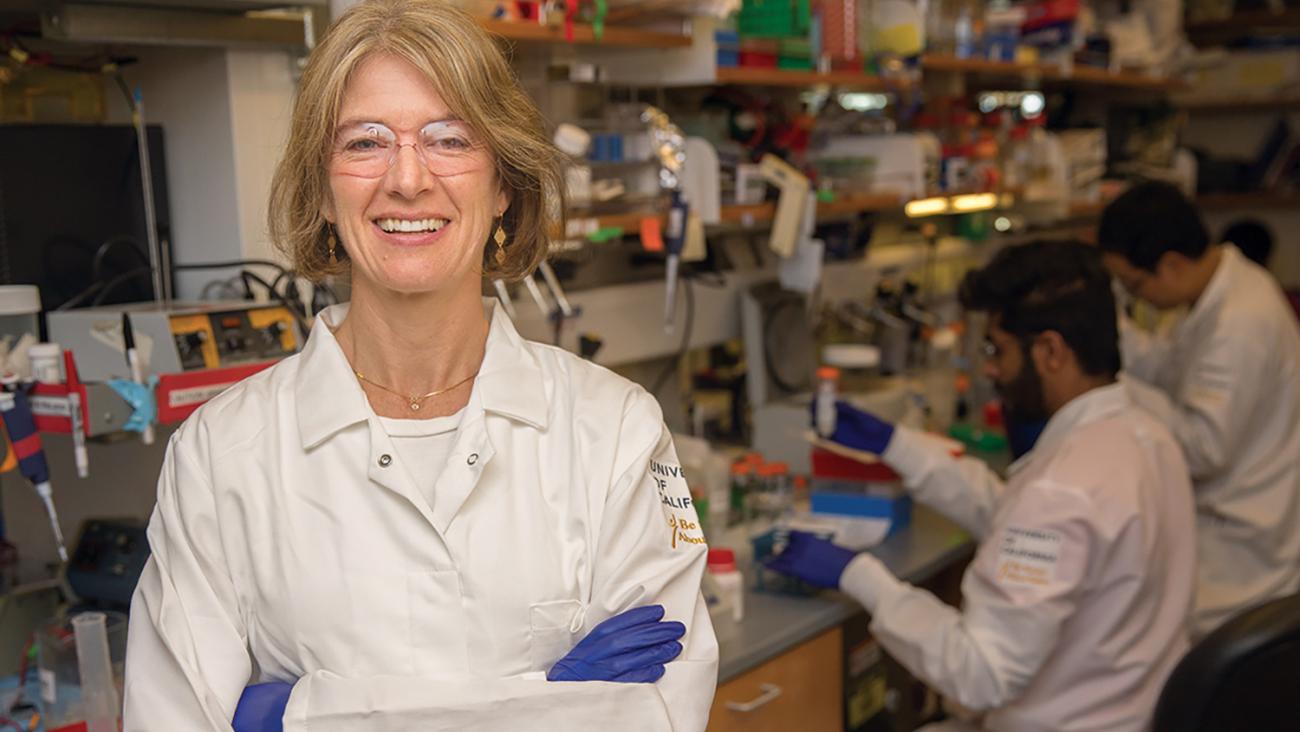 Pomona College alumna Jennifer Doudna ’85 will receive a 2020 Nobel Prize in Chemistry for her pioneering discovery of a gene-editing tool that has revolutionized genetic engineering in recent years.

The Royal Swedish Academy of Sciences this morning announced the selection of Doudna, professor and researcher at UC Berkeley, and her collaborator, Emmanuelle Charpentier, director of the Max Planck Unit for the Science of Pathogens in Berlin.

The chemists will share a prize of 10 million Swedish krona—more than $1 million. Nobel medals and awards in the sciences traditionally are given at a ceremony in Stockholm on Dec. 10.

Doudna is the first graduate of Pomona College to receive a Nobel Prize.

“Jennifer Doudna’s revolutionary research in gene editing and her thoughtful consideration of its implications hold the potential to change the lives of countless people around the globe,” said Pomona College President G. Gabrielle Starr. “We are so proud that she received her undergraduate education at Pomona College and that she continues to engage in the life of our community. Her sense of discovery, her commitment to rigorous work and her willingness to reflect on its meaning embody some of the highest values of the College.”

A former member of the Pomona College Board of Trustees, Doudna was also chosen for the 2009 Robbins Lectureship, which has brought some of the world’s pre-eminent chemists, including a number of Nobel laureates, to Pomona College over the years.

Doudna grew up on Hawaii’s big island—where her father was a professor of English literature at University of Hawaii—attending Hilo High School before coming to Pomona.

She cites her Pomona education as a key ingredient in her scholarly success. “I am grateful to Pomona every day, honestly,” she said in a recent Pomona College Magazine interview, “because it was a liberal arts education that exposed me to so many ideas that I would never have come in contact with, probably, without having attended Pomona.”

Of particular importance, she has said, were mentors like Pomona professors Fred Grieman and Sharon Panasenko. “Mentors are critical,” Doudna told UC Berkeley’s California Magazine. “And fortunately for me, I’ve worked with absolutely outstanding scientists at every stage of my career.”

Grieman, now a full professor at Pomona, taught Doudna in the two-semester, yearlong physical chemistry sequence during her senior year. What set her apart, he recalls, “was her excitement and joy about learning everything.”

At times, he says, students can be put off by the challenging nature of chemistry. Not Doudna.  “She really enjoyed the rigor and the excitement of learning something that was that difficult—but also something that she could apply later.”

The class had about 15 students, and they were part of a tight-knit group that was enthusiastic about chemistry. Doudna, he says, was all about “going that extra step.”

Panasenko—now Sharon Muldoon—is retired, but she has fond memories of Doudna as a junior in her biochemistry class, preparing to enter what was then an intimidatingly male-dominated field. “Most of the students were going to medical school,” she says. “Jennifer was one of the few who were interested in a research career, so we talked a lot about it.”

Muldoon was so impressed by the young Doudna that she invited her to work in her research lab, studying the bacterial communication systems that permit organisms like Myxococcus xanthus to self-organize into colonial forms.

“She really showed a tremendous amount of aptitude and talent for lab work, which certainly helps if you’re going into a research career,” adds Muldoon.

Doudna went on to earn her doctorate at Harvard under the supervision of geneticist Jack Szostak, who later won the Nobel Prize for Medicine. It was there that she began working with ribonucleic acid (RNA), the biochemical cousin of DNA which she has continued to study throughout her career.

She then did a postgraduate fellowship with another Nobel laureate, Thomas Cech of the University of Colorado, Boulder, and went on to teach at Yale University. In 2002, she returned to California as a professor at UC Berkeley, where she now holds the titles of professor of chemistry, professor of biochemistry and molecular biology, and the Li Ka Shing Chancellor’s Chair in Biomedical and Health Sciences. She has also been a Howard Hughes medical investigator since 1997. In addition, she recently opened a CRISPR laboratory at the Gladstone Institutes in San Francisco, where she holds the title of senior investigator.

In the press release announcing the award, the Nobel selection committee cited the way in which the CRISPR/Cas9 discovery has transformed the life sciences in recent years.

“Emmanuelle Charpentier and Jennifer A. Doudna have discovered one of gene technology’s sharpest tools: the CRISPR/Cas9 genetic scissors,’’ reads the Nobel announcement. “Using these, researchers can change the DNA of animals, plants and microorganisms with extremely high precision. This technology has had a revolutionary impact on the life sciences, is contributing to new cancer therapies and may make the dream of curing inherited diseases come true.”

CRISPR is an acronym for “clustered, regularly interspaced, short palindromic repeat,” a genetic sequence in bacteria that serves as a kind of immune system against viruses. Cas9 is an enzyme that plays a key role in that system. Doudna, who had been studying CRISPR sequences since 2005, teamed up with Charpentier in 2011 to figure out how this bacterial defense mechanism worked. As they came to understand the underlying mechanisms, they soon realized that it could be re-engineered into a powerful gene-editing tool—one that has turned out to be much simpler and cheaper to use than any that had come before, as well as being exceptionally adaptable and precise.

Since 2012, when Doudna, Charpentier and their research groups first published their findings in the journal Science, the CRISPR-Cas9 gene-editing tool has been adopted by laboratories around the world and hailed as a game-changer in the biological sciences. It has opened new vistas of possibility for clinical gene therapies and genetic modifications of every description. Since 2012, that original article has been cited in more than 2,500 published articles in scientific journals.

As the technique has spread and taken on new applications, Doudna has also been at the forefront of public debate about the ethical issues it raises, arguing, among other things, for a moratorium on the technique’s use in human embryos until its safety has been established.

In her 2017 book, A Crack in Creation: Gene Editing and the Unthinkable Power to Control Evolution, written with co-author Samuel H. Sternberg, Doudna tells the story of the CRISPR/Cas9 breakthrough, speculates about its future impact and discusses her own efforts to ensure its ethical use.

In the scientific community, speculation about Doudna as a Nobel candidate has been widespread since at least 2015, when she and Charpentier received the $3 million Breakthrough Prize in Life Sciences for their work.

In the intervening years, Doudna has also shared in the Canada Gairdner International Award, the Heineken Prize for Biochemistry and Biophysics, the Gruber Prize in Genetics, the Tang Prize, the Japan Prize, the Albany Medical Center, the NAS Award in Chemical Sciences, the 2018 Kavli Prize in Nanoscience, the Harvey Prize in Human Health in 2019 and, most recently, the Wolf Prize in Medicine, the Guggenheim Fellowship for Natural Science in 2020 and SynBioBeta’s Pioneer in Synthetic Biology Award. She was also named a foreign member of the Royal Society in Great Britain and received the Pearl Meister Greengard Prize from Rockefeller University.

With the arrival of the COVID-19 pandemic in the United States, Doudna converted a laboratory in San Francisco into a coronavirus testing facility and, using CRISPR technology, worked on developing a faster, easier and more accurate COVID test.