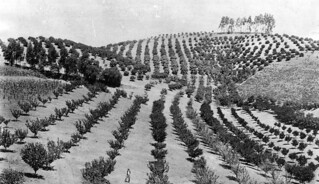 The first refrigerator cars on the Southern Pacific Railroad entered operation in 1886, permitting oranges and other perishable fruits and vegetables to be transported across the continent for the first time and contributing to the economic boom in Southern California. The first trainload of refrigerated oranges that left Los Angeles in February of that year also played a role in escalating the great real-estate boom of 1885-88 as people rushed into the region to establish homes in what was referred to as “the new Italy.” In a period of runaway land speculation, the Pacific Land Improvement Co. made the ambitious decision to construct a new hotel in a stretch of scrub desert along the new rail line as the centerpiece of a proposed new town they would label “Claremont the Beautiful.” That decision would turn out to be unwise financially, as the boom would soon turn to bust, but it would have a huge impact on the college that would be founded a year later in nearby Pomona.

The Statue of Liberty was completed and dedicated.

After almost 30 years of fighting, Apache leader Geronimo surrendered with his last band of warriors at Skeleton Canyon in Arizona.