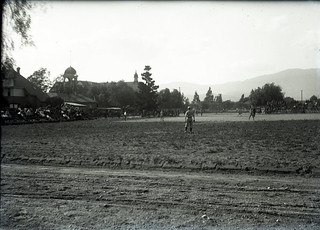 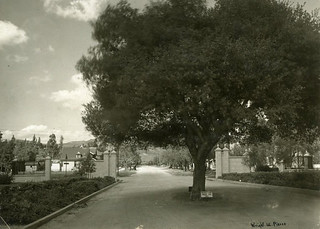 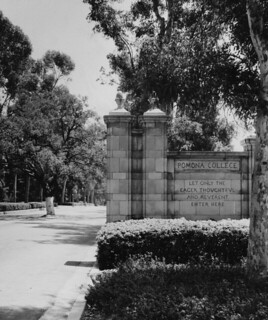 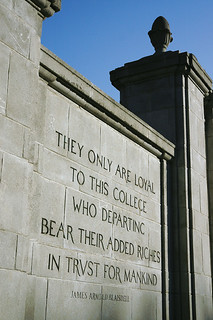 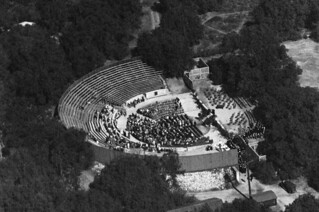 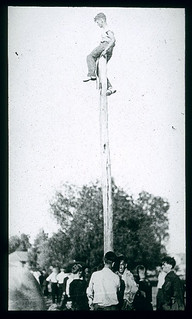 Pole Rush competition in 1914
8 years ago by Pomona College 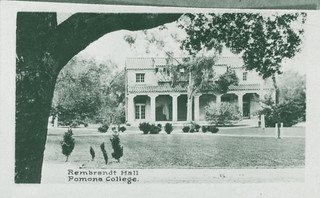 Rembrandt Hall in 1914
8 years ago by Pomona College 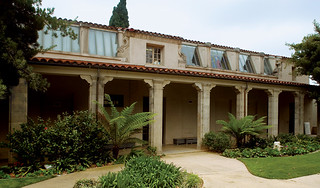 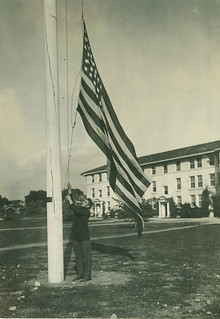 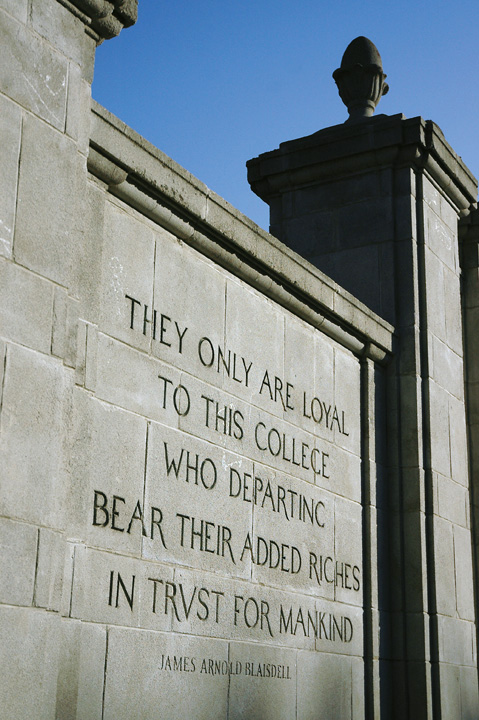 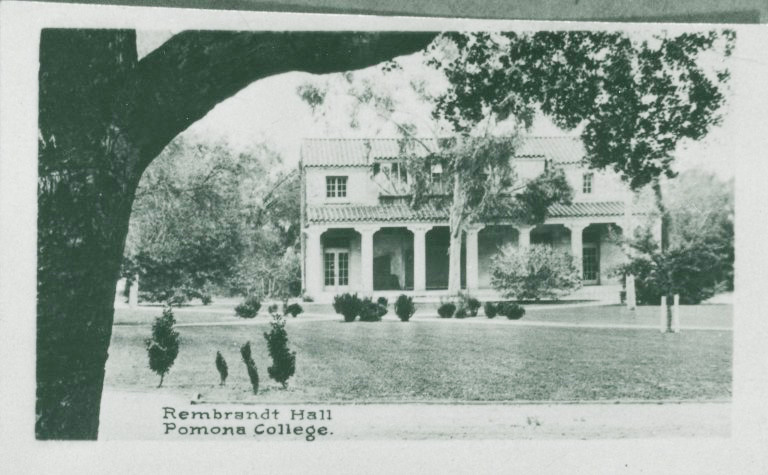 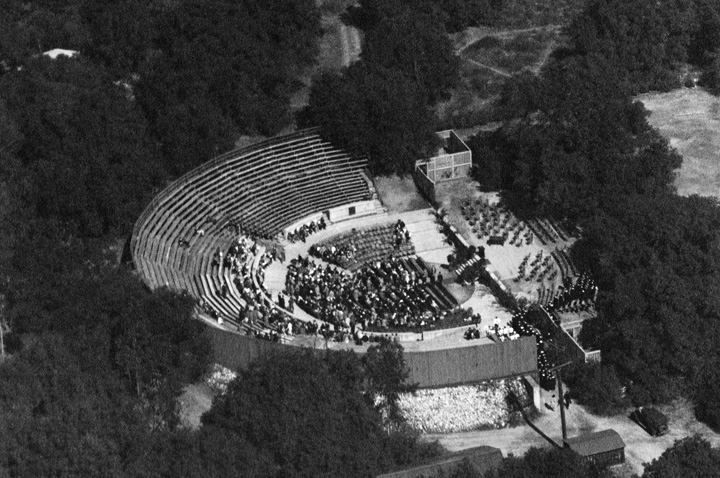 While Myron Hunt’s Mabel Shaw Bridges Hall of Music was under construction, several campus beautification efforts were accomplished with support from William S. Mason, a Chicago businessman and friend of Pomona faculty member Judge Charles G. Neely. Foremost among these was an impressive gate flanking College Avenue at Sixth Street, which Hunt’s campus plan had identified as the northern boundary of the campus. The gate was intended to provide a unifying point of entry to the College precinct, and at the ceremony celebrating the laying of the cornerstone on Founders’ Day, Oct. 14, 1914, President Blaisdell remarked: "This day marks the beginning of a new period of enrichment. We have struggled through the days of necessities; today, in a certain sense, we begin to glorify and beautify our life."

The classic design of the gate, which consisted of matching concrete block panels and curving iron grilles, was the work of Hunt, but it was President Blaisdell who composed the flanking inscriptions: “Let only the eager, thoughtful and reverent enter here." And "They only are loyal to this college who departing bear their added riches in trust for mankind."

Blaisdell was gratified by the positive reception to the gate and its message, noting "By nothing would I like more to be remembered." Many years later however, as E. Wilson Lyon writes, Blaisdell commented that, on reflection, the first of the inscriptions was perhaps "a trifle too prohibitive" for entering students and might have been better without the word "only"; but the second was "exactly as I still would wish it and I hope it may always express the final admonition of the college to its departing sons and daughters."

To carry Blaisdell’s ringing statement of educational mission, which was inscribed in bold Roman script, Hunt designed a classically elegant gateway employing Doric and Ionic forms—pillars, architraves, pine cone pinnacles—and, in its placement and purpose, echoing the traditional ceremonial entryways to ancient Greek and Roman cities. The gate invites entry while also marking a physical and psychological boundary, and it is fitting that Pomona’s incoming students traditionally process as a group through this portal as they begin their college career. Since Hunt’s time the campus has expanded north of Sixth Street with the result that the Gate now marks the meeting place of north and south campuses rather than a point of entry; nonetheless, it continues to serve its symbolic purpose.

Completed in 1914, Rembrandt Hall was Myron Hunt’s second building for Pomona and the first to be completed under President Blaisdell; it was also the first building devoted to art in the Pomona Valley. The need for space designated for art was recognized as early as 1908 by the Rembrandt Club, and a hall for this purpose was one of the goals of the College’s Million Dollar Campaign undertaken shortly after President Blaisdell took office.

The Rembrandt Club, which took the initiative and led the drive for the building, had been established in 1905 by Hannah Tempest Jenkins, who had been appointed that year as Associate Professor of Art and Design and Director of the School of Art and Design; Phebe Estelle Spalding, a professor of English literature who also taught art history and had created the College’s first art gallery in her own office space in Holmes Hall; and Lucretia Brackett, wife of Professor Frank Parkhurst Brackett, who had taught mathematics and Latin since the College’s founding. Mrs. Brackett had also played an important role in establishing the School of Art and Design at Pomona. The Rembrandt Club was dedicated to the “study of art and the fostering of the interest of the art department and gallery,” a mission it fulfills to this day.

In 1914, the decision was made to turn both music and art into college departments rather than separate schools, and to situate their buildings close together. That year, Rembrandt Hall was built, with studio and gallery space for the new department; Hunt was commissioned at the same time to design the building for music (Mabel Shaw Bridges Hall of Music) that soon followed. The Rembrandt Club’s involvement in the building that bore its name amounted to a partnership with the College. An agreement of 1917 states that “Rembrandt Hall is dedicated to the development and fostering of the aesthetic interests of the College and Community, more particularly on the side of Art.” It goes on to list four primary constituencies—The Art Department, Rembrandt Club, “wider Community interests,” and “wider College interests”—and to specify how the building was to be used. The Art Department was given use of the sky-lighted studio and office on the upper floor and was permitted to use the ground floor; the latter was, however, primarily the Club’s domain, the site of its regular meetings, receptions and exhibitions. The agreement also specified that the building was not to be used for student social activities, for large groups that might interfere with the work of the studios, or for classes other than art.

The location of Rembrandt Hall was dictated by Hunt’s 1908 campus plan. The architect’s original design also called for a museum at the western end, an idea realized only in 1958 with the building of Montgomery Gallery. In style, Rembrandt conformed to the model Hunt had established in Smiley Hall: stucco walls topped with a red tile roof, simple in form with Mediterranean details and arcades, which were a key feature of Hunt’s plan for the campus. The north-facing portico of Rembrandt Hall resembles a stoa—the covered walkway common to ancient Greek and Roman architecture—but, in this case, with square piers supporting the roof rather than columns or arches. Until the construction of Thatcher Music Building in 1969, Rembrandt was open to Marston Quadrangle but recessed from its perimeter, creating, as George Gorse notes, the zigzag pattern—building facade alternating with open courtyard—that distinguished Hunt’s plan. As in his other buildings, the architect here used reinforced concrete for the structure and cast stone for the building’s decorative details.

Completed in 1914, the Greek Theatre provided a focal point for the College on the east and a gathering place for organized entertainments at the edge of the picturesque Wash. A civic space embedded in nature, it represented both an extension of the “college in a garden” concept and a reference to the classical groves of academe.

From the earliest days of the College, the western edge of the Wash had been the site of “fun-producing entertainment” traditionally offered by senior classes on the Tuesday afternoon of Commencement week, as well as for more formal performances and ceremonies. Over time, audiences became too large for the setting, and, in 1910, the senior class took the initiative in creating a permanent Greek theatre with a gift of $2,500. Invited to design the facility, Myron Hunt first visited the Greek Theatre at The University of California, Berkeley (1903). His proposal for Pomona included a stage, seating for 4,000, dressing rooms and stage facilities, all within a classical Greek structure. Although Hunt’s design was never fully realized, the stage and amphitheater were completed, with several hundred concrete seats and wooden bleachers for 3,000 additional spectators.

Through the efforts of the Associated Students, Pomona’s first swimming pool was built east of the College’s heating plant.

In 1912, the members of Pomona’s faculty who had been elected to Phi Beta Kappa at their own undergraduate institutions began the process of applying for a Pomona chapter. President Blaisdell gained the required endorsements from six university and college chapters, and that summer, the new chapter was approved. The College celebrated the official installation of its new chapter of Phi Beta Kappa on March 7, 1914.

Membership in sororities and fraternities was limited in 1914 to juniors and seniors.

Helen Keller and Booker T. Washington came to Pomona in 1914 to give speeches.

The 1915 Metate (published by the junior class in 1914) notes that 70 percent of all Pomona alumni go on to obtain higher degrees.