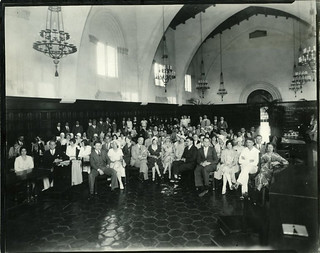 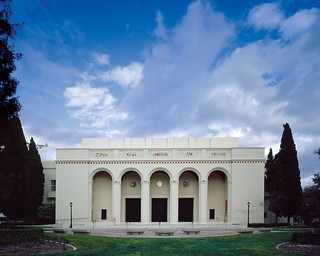 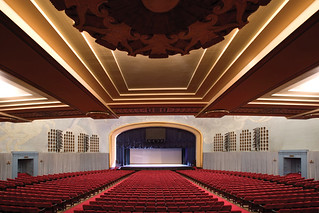 Current view of Bridges Auditorium, built in 1931
14 years ago by Pomona College 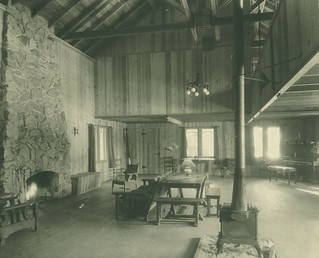 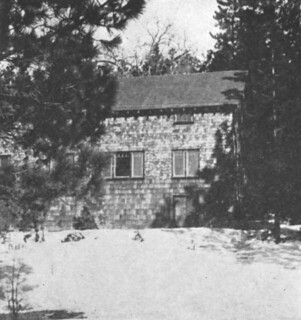 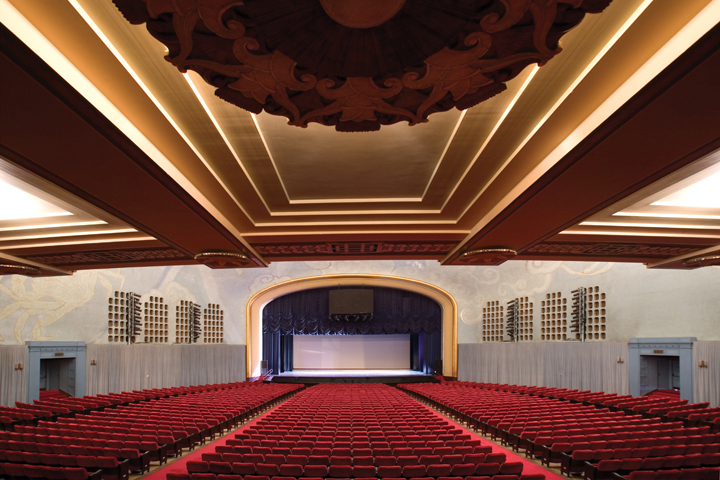 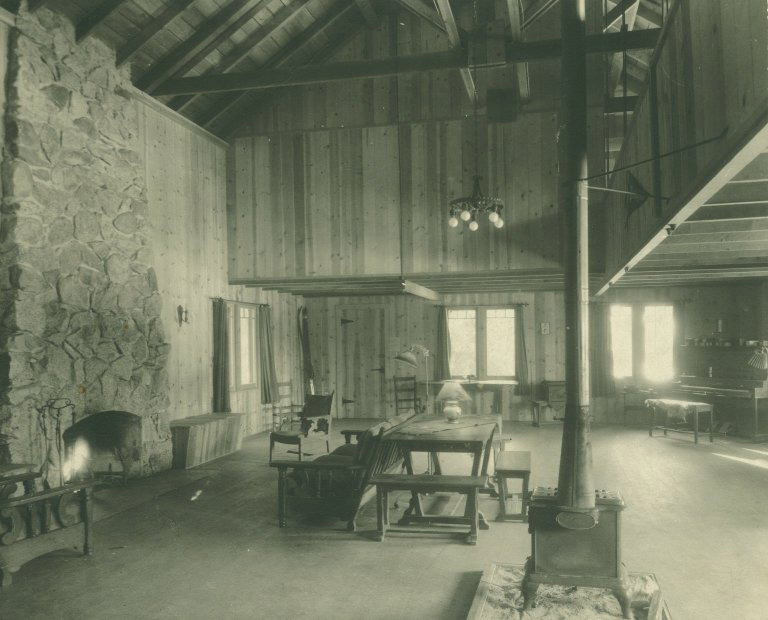 The story of Bridges Auditorium belongs to the tenure of two Pomona presidents: James Blaisdell, who had maintained a close relationship with donor Appleton Shaw Bridges, who funded Bridges Hall of Music in 1915, and Charles Edmunds, who followed Blaisdell as president in 1928.

In 1925, Mr. Bridges expressed his continuing interest in music and mentioned the possibility of supporting the construction of a large auditorium. Bridges, joined by his brother-in-law H.H. Timken (brother of Amelia Timken Bridges), president of Timken Roller Bearing Corporation in Ohio, made the gift in May 1928, at the end of Blaisdell’s presidency. Construction began in 1930, and the auditorium was completed and dedicated in the fall of 1931, during the presidency of Charles Edmunds.

The site selected was the eastern perimeter of Marston Quadrangle, occupied at the time by an unsightly heating plant, complete with tall smokestack. College buildings flanked the other three sides of the quad, and George Marston, who was also a friend of the Bridges family, donated funds to clear the site, a process that also involved moving the original Renwick gymnasium farther east and removing a swimming pool. According to Wilson Lyon, Marston believed that: “Since this would inevitably be a very massive building it should have an ample foreground, and with Bridges Hall of Music the companion building nearby, a location east of the large open quadrangle framed in a vista of trees and shrubs seemed ideal.”

Although constructed on land owned by Pomona College, Bridges Auditorium was a joint undertaking of the relatively new entity known as The Claremont Colleges, which had held its first organizational meeting in December 1925. When completed, Bridges Auditorium was, in the words of Wilson Lyon, “a dramatic illustration of the value of joint facilities for the Associated Colleges” and a focal point for the campuses.

Before drawing plans for the auditorium, architect William Templeton Johnson toured the major concert houses of Europe, and the resulting design, referred to at the time as a “free adaptation of northern Italian Renaissance architecture,” was at once restrained and grandly monumental. The massive exterior of Bridges Auditorium—with its columns, vaulted arches, three massive wooden entrance doors facing west, and arched porticoes on the north and south—conveyed a sense of dignity and moment. Above the entrance portico, in the fashion of civic buildings of the time, were engraved the names of composers Richard Wagner, Frederick Chopin, Ludwig van Beethoven, Johann Sebastian Bach, and Franz Schubert. The 34 x 90-foot foyer had a terrazzo floor, Carrara marble columns, cast stone pilasters, and a hand-painted coffered ceiling.

The auditorium boasted unobstructed views from all seats, an innovation made possible by the cantilevered 500-seat balcony that obviated the need for supporting pillars; a 6000-pipe organ; indirect lighting; and a downdraft ventilating system that could exchange the air in 10 minutes. The proscenium, 62 feet high by 36 feet wide, could accommodate a 100-piece orchestra. Perhaps most spectacular was the 22,000-square-foot ceiling, a parabola extending from the top of the proscenium arch to the rear wall, designed to offer ideal acoustics for vocal and instrumental music. On its concave surface a fresco by artist John Smeraldi, who had created the star-filled ceiling of New York City’s Grand Central Station, depicted the signs of the zodiac in silver and gold against a blue field.

At the time it was built, Bridges Auditorium was the largest college or university auditorium on the West Coast. Although enrolled students numbered 1,300 in 1931, the Bridges family, with faith in the College’s growth and the civic value of such a facility, provided seating for 2,500 (then the population of the City of Claremont). It proved superbly suited for concerts, drawing large audiences for major artists and ensembles, among them Sergei Rachmaninoff, Arthur Rubinstein, Andres Segovia, Kirsten Flagstad, Helen Traubel, Joan Sutherland, the Metropolitan Opera, and the Bolshoi Ballet; and was equally accommodating for convocations and speakers such as Eve Curie, Admiral Byrd, Amelia Earhart, Eleanor Roosevelt, and Will Durant. Over two million people attended programs between 1931 and 1975, when the building was temporarily closed.

Bridges Auditorium has a history rich with memories and anecdotes. According to his son Alan, architect William Templeton Johnson met the young Leopold Stokowski during his European sojourn, and the musician suggested he use Paris’s Salle Pleyel as his model for the hall’s acoustics. Several years later, as Bridges was nearing completion, Johnson invited his now-distinguished friend, who was then working in Hollywood several months each year (and would soon conduct the orchestra for Walt Disney’s Fantasia), to review the hall’s acoustics. Stokowski did so, concluding, “Mr. Johnson, she is fit for the fiddle.”

Although Harwood Court, built in 1921, was widely admired and represented significant improvement in accommodations for women students, it was soon judged inadequate. The first response to this dilemma was the addition of a kitchen and dining hall on the southern side of the building in 1930–31, a gift of the children of C.E. Harwood in memory of their sister Aurelia Squire Harwood, who had been the first woman president of the Sierra Club. Designed by Webber and Spaulding (architects of Clark/Frary), the hall featured high ceilings, bay windows and pillared archways.

For the first time in 1931, the separate departments of Botany and Zoology were listed together in the catalog as division of a single Biology Department. Similarly, the former departments of Greek and Latin were combined into a new Department of Classics. A new department was also included: the Department of Geography, with courses available at Scripps College.

Under the leadership of Dean of Women Jessie Gibson, land was secured in 1929 at Idyllwild for a mountain cabin to serve the women of the College. After some delays in funding and construction, the cabin, named Halona Lodge, was dedicated on May 9, 1931. The name “Halona,” meaning “place of happiness,” was chosen by Dean Gibson.

End of Dining at the Claremont Inn

The completion of Harwood Dining Hall for women marked the end of 25 years of student dining at the Claremont Inn. Dining for male students had moved to Frary when it was completed in 1929. From 1931 until its closing in 1968, the Inn served as a center for faculty, community and the general public.