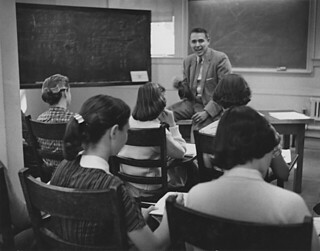 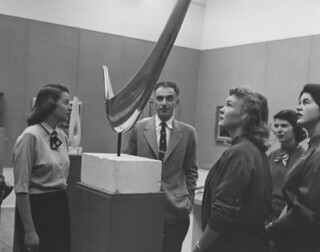 Dr. Peter Selz, chairman of the Art Department, with students in Rembrandt Hall in 1955
8 years ago by Pomona College 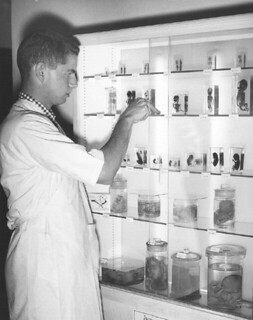 The Wig Distinguished Professorship Awards were endowed in 1955 by R.J. Wig, President of the Board of Trustees from 1948 to 1961. Since then, the awards for excellence in teaching have become the highest honor bestowed on Pomona faculty, recognizing exceptional teaching, concern for students, and service to the College and the community. The recipients of the Wig Award are elected each year by the junior and senior classes and then confirmed by a committee of trustees, faculty and students.

As the advent of computing and the dawn of the space race made technological education a growing national priority, Harvey Mudd College was founded as the fourth undergraduate institution of The Claremont Colleges. Chartered in 1955, HMC was founded to be a liberal arts college with a strong emphasis upon science and engineering. The institution was named for former Pomona College trustee Harvey Seeley Mudd, who served as Chair of the Board of Fellows of the Claremont Graduate University for a quarter of a century. While serving in that position, Mudd helped to plan for the new institution that was chartered just a few months after his death in 1955, with the backing of his family and friends. HMC opened its doors to students two years later, in 1957.

General Motors Corporation became the first American corporation to make a profit of more than one billion dollars in one year.