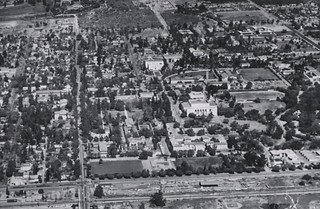 An exchange program between Pomona and Swarthmore colleges was arranged, allowing for an equal number of students from each institution to attend the other for one semester.

In 1962, a coffee house known as The Smudge Pot was opened in the Edmunds Union. The intimate space, with wood paneling, booth seating and partitioned rooms for privacy, quickly became popular. Students gathered in the basement to listen to live music and enjoy conversation with friends, often filling the pages of The Student Life with debates over the cost of admission to hear their friends perform at the coffee house’s nightly concerts.

Held on Founder’s Day, Oct. 16, 1962, Pomona’s 75th anniversary celebration was attended by representatives of 149 colleges and universities, ranging from the University of Oxford, founded in the 12th Century, to the University of California, Santa Cruz, established in 1961. Historian Henry Steele Commager gave the main address, “The Emancipation of the College,” which addressed “an increasing distinction between the work of the college and the work of the university.”

The celebration also included conferences on science and the arts, and an anniversary concert by the College Choir and Symphony Orchestra. Among those attending were Arthur M. Smith and George Sumner, members of the first graduating class, the Class of 1894.

During the 1962 campaign for governor of California, incumbent Governor Edmund G. Brown and challenger Richard Nixon spoke in Bridges Auditorium.

With increased enrollment at Pomona and the Claremont Men’s College, the number of men outnumbered women by 700. The colleges weighed two options: increasing the enrollment at Scripps or founding a new women’s college. When Scripps declined to expand enrollment, a faculty subcommittee recommended the establishment of a residential “liberal arts college for women, with an emphasis on the social and behavioral sciences.” Thanks to a generous gift from Mr. and Mrs. Russell K. Pitzer, construction began and Pitzer College opens in 1963.

Kent Brownridge ’62 joined Wenner Media in 1974, where he became vice president and general manager of Rolling Stone magazine. During his 31-year tenure, Brownridge saw Rolling Stone circulation surpass one million and worked with Jann Wenner to turn Us celebrity gossip magazine into a profitable weekly. Brownridge left Wenner Media in 2005, moving to Virginia to train horses to compete in combined driving events. He later became CEO of Dennis Publishing and CEO and chairman of Alpha Media Group (Maxim, Blender).

The Algerian War ended, and Algeria became independent from France.

The world comes to the brink of nuclear war during the Cuban missile crisis.