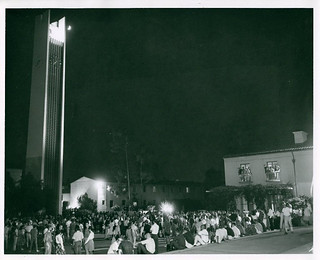 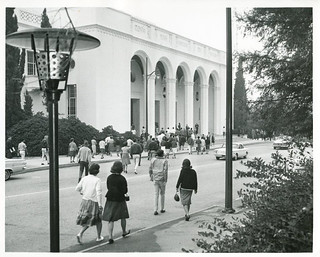 Students walk to the west entrance of Bridges Auditorium on Founders Day 1963.
8 years ago by Pomona College 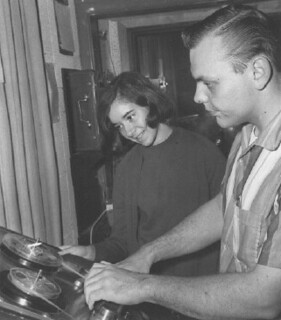 The new “Washington Semester” program was introduced, in which a small number of Pomona students, as well as the occasional student from Scripps or CMC, would spend a semester in Washington, D.C., taking courses at American University Graduate School, focusing on the study of government and politics, meeting and interviewing with government officials, and studying at the Library of Congress to develop a thesis project.

A satirical student group called the Radical Reactionary Popular Front (RRPF) appeared in 1963, making fun of extremist positions on both the right and the left, with a supposed “Compact of December 10.” The Compact seems to be a parody of older manifestos such as the 1962 Port Huron Statement of the liberal Students for a Democratic Society or the 1960 Sharon Statement of the conservative Young Americans for Freedom. The group’s motto was: “Think Extreme.” The group also planned to present an annual Extremist of the Year award.

The new Crossroads Committee was organized to select and train six Pomona students to participate in summer work projects in Africa. Students lived and worked with African counterparts. On their return they were to share their experiences and provide information about Africa through seminars featuring outside speakers, professors, African students and panel discussions

“The Advancement Program,” a campaign launched by President E. Wilson Lyon, set a fundraising objective of almost $13 million. Frank Seaver 1905 made an early gift of gift of $1 million for a new chemistry building and, when building costs double, increased his gift to $1.6 million. In 1965, a Ford Challenge Grant prompted the trustees to expand the campaign goal to $19,641,000. When the campaign ended in 1969, it totaled more than $21 million, funding the redesign of Mason and Crookshank halls and the construction of Oldenborg Center, Pendleton Center and Thatcher Music Building.

A new magazine called Pomona Today replaced the “News Letter” as the primary publication of the College for alumni, parents and friends.

In one of a series of tit-for-tat pranks between Pomona and CMC students prior to football games between the two schools, which had become rivals after splitting their joint athletic program in 1958, a group of CMC students raided the Pomona campus and ringed the flagpole on Alumni Field with 66 tires. The deans of the two schools decided that the episode was not quite serious enough to require a cancelation of the game.

With the nation in shock following the assassination of President John F. Kennedy on Nov. 22, the College lit the bonfire that had been planned for the homecoming game against Occidental College as a silent tribute to the fallen president. The next Tuesday, the football game between Occidental and Pomona was played beneath a flag flying at half mast.

Pitzer College was founded in 1963 as the sixth institution of The Claremont Colleges. Named for benefactor Russell K. Pitzer, the College began as a residential liberal arts campus for women with a curricular emphasis in the social and behavioral sciences. Pitzer was the first independent women's college to open in the United States since Bennington College in 1932.

The Claremont Colleges joined in constructing a joint facility, the Garrison Theater, which faces Honnold Library.

Gov. George Wallace stood in the door of the University of Alabama in a vain attempt to prevent African Americans James Hood and Vivian Malone from enrolling.

After Kennedy was assassinated in Dallas, Lyndon Johnson was sworn in as the 36th president.