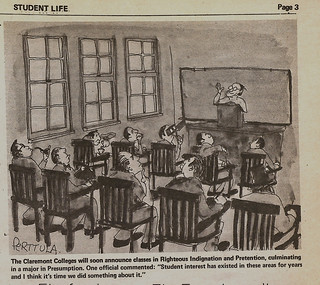 TSL cartoon from 1974
8 years ago by Pomona College 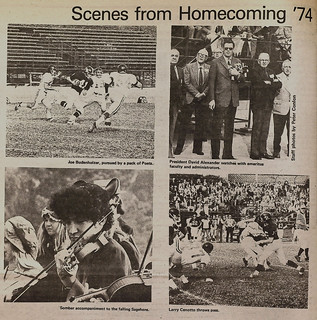 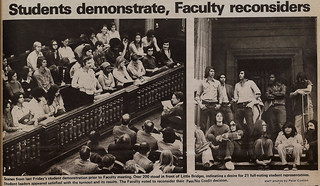 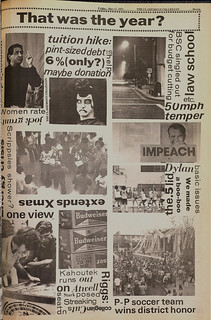 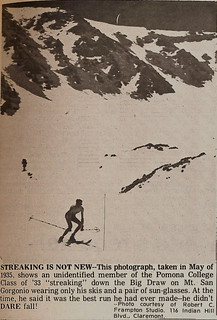 A proposed budget cut of $30,000 from the Black Studies Center budget proved controversial. The decision, made by Provost Howard Brooks and the Council of Presidents of The Claremont Colleges, eliminated one full-time faculty position, all part-time faculty, a secretarial position and the pre-freshman program. David Alexander explained at a meeting of Pomona faculty that the two-year program to reduce funds for the Black Studies Center would make it possible to give more funds to the Chicano Studies Center.

A proposal to bar student attendance at faculty meetings was defeated. President David Alexander, who supported the motion, criticized students for being “their own worst enemies” by “coming in and going as they please, passing notes to each other, slouching in chairs” and “grandstanding” during discussions.

Field tutorials, supervised by Pomona faculty, became a new feature of the Study Abroad Program. According to The Student Life, the first tutorial, under the guidance of Professor Ralph Bolton, was to be held in the Peruvian Andes.

The Claremont Colleges approved a new concentration in linguistics, which was to be offered the following academic year. Joining Pitzer Professor Ron MacCauley, who was head of the program, were Pomona Professors Karen Kossuth (Modern European Languages) and Jay Atlas (Philosophy). At the time, only about 50 other undergraduate colleges offered the major.

Complaints about food in the dining halls were common topics of stories and editorials in The Student Life. One article reported on a series of guerilla theatre performances. “The ostensible target of the display, which took place in Frary, Oldenborg and Gibson dining halls, was the controversial Saga Food Service, instituted in fall 1972 to numerous student complaints. However, the skit also included timely reference to the popular contemporary film, The Exorcist.”

From The Student Life: “President David Alexander wondered early last week how long it would be before the newest national college craze hit Claremont. By now, unless you are totally out of it, you know what he meant, and he found out Wednesday night as streaking came to Pomona…Wednesday night about a dozen downstairs Blaisdellites became inspired, shed their external trappings and set out on the first biggie streak at Pomona. The group ran out on College, up to the Coop and then over to Smiley…The best was yet to come, though , as someone had the marvelous idea of streaking the annual pre-med meeting…Picture this—Seaver Auditorium, full of premeds in a very serious frame of mind…Then all of a sudden our streaking friends break through the doors and run down the aisles shouting, ‘Anatomy! Anatomy! Anatomy!’”

Republican gubernatorial candidate and former government professor at Pomona Houston I. Flournoy paid a visit to Pomona in October. The Republican hopeful spoke for almost five minutes, focusing on his Democratic opponent Jerry Brown before taking questions from the audience.