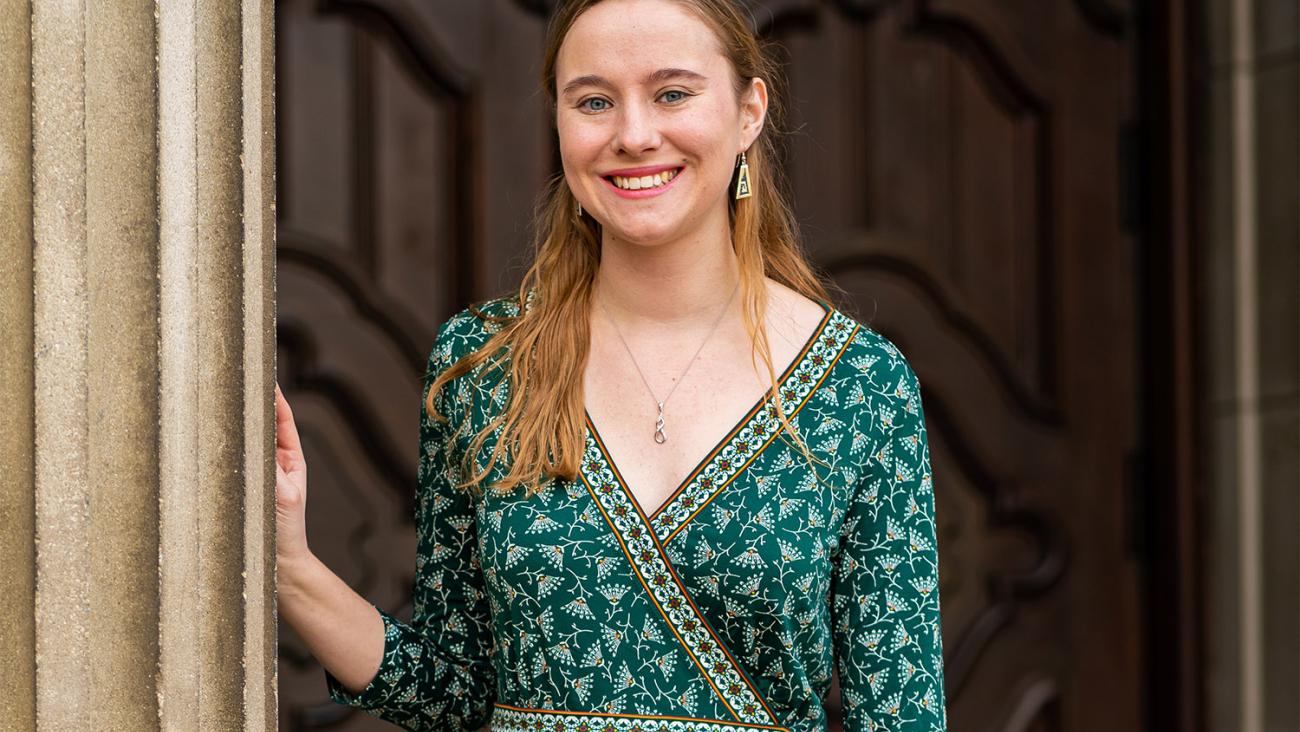 It’s awards season — but first up are the Churchills, not the Oscars. And the winner is Elise Koskelo ’20, who is among only 16 American students awarded the Winston Churchill Foundation scholarship this year to study and conduct research in the sciences, mathematics and engineering at the University of Cambridge. Pomona is one of a select list of U.S. colleges and universities invited to nominate two candidates each year.

Koskelo’s path to Cambridge, England, started in Los Alamos, New Mexico, where her love for STEM emerged early in elementary school with a fascination with mathematics. But she also loved reading and writing. Starting at age 11 with a school project to design her own house, her ambition turned towards architecture, which she saw as a perfect blend of math and art. Later, during her high school years at an intensive summer program in architecture, her interests turned to engineering and calculations beyond trigonometry. In college, she originally took physics as a requirement for the combined pre-engineering dual degree program offered by Pomona in partnership with Dartmouth College. Her interest was caught, she says.

At Pomona, Koskelo is a double major in in physics and math. She then plans to pursue a Ph.D. in physics, then become a college professor — with the goal of one day serving as a scientific advisor for the United Nations.

The Churchill scholarship will take her further down that path. She will conduct research with Cambridge’s Quantum Matter Group, where she can pursue her interests in quantum magnetism and superconductivity.

Koskelo notes many Pomona professors and classes have been guides along the way.  Professor of Physics Janice Hudgings propelled her toward a career as a research scientist. Math courses with professors Ami Radunskaya, Stephan Ramon Garcia and Adolfo Rumbos left their mark. The course Spacetime, Quanta and Entropy with Professor Thomas Moore her first year fired her up.

There has been no shortage of fuel for that fire. Internships and collaboration with her professors stoked the flame. She spent several summers at Los Alamos Engineering Institute and this past summer held a 10-week internship at the National Oceanic and Atmospheric Administration’s Earth System Research Laboratory. She conducted a Summer Undergraduate Research Program (SURP) project on molecular spectroscopy with Physics Professor Richard Mawhorter in Hanover, Germany, and worked with Hudgings on research and a conference paper on thermoreflectance (TR) imaging and then presented the technical talk at the SPIE Optics and Photonics meeting in San Diego in August of last year.

In the midst of all her studies, Koskelo says family, faith, friends and fellow students have served as her support system. And while she says she is looking forward to the academic rigor, mentoring and research she will find at Cambridge, it won’t be all work, all the time. She also anticipates the camaraderie, community and culture she will experience while there.

“I am really looking forward to immersing myself in a new culture and to meeting new friends from across the globe. I am a fan of shows like ‘Downton Abbey,’ British literature and World War II history, and am very excited to explore the U.K. in person. I am also looking forward to rowing and hiking while at Cambridge.”

Koskelo is no stranger to prestigious awards. Last year, she won the Barry M. Goldwater Scholarship, which is no small achievement. The Churchill win is confirmation she is the crème de la crème among STEM undergraduates. The news that she was a recipient of the award left her awestruck and excited, she says.

“It gave me more confidence to believe that I can be a leader in my chosen field. I also felt a great sense of gratitude for the unbelievable opportunities available for me to pursue my dreams, and for the support that I have received throughout my education, from my family, my mentors and my peers.”

Among her advice for incoming students is to find a major that interests them and then commit wholeheartedly to the topic and department.

“If it feels like home or you enjoy doing that homework first — you’ve found it!”

In addition to Koskelo, the Winston Churchill Foundation is also recognizing Professor of Chemistry Malkiat Johal, who has mentored or been a professor to four Pomona students who have become Churchill Scholars: Michael Gormally ’11, Will Fletcher ’12, Gabriella Heller ’14 and Hannah Wayment-Steele ’15. Johal wrote a recommendation for Koskelo, one his students in Chemistry 51.

“This award recognizes the amazing impact [Johal] has had in recommending Pomona College students for the scholarship over the past 10 years,” says Michael Morse, executive director of the Winston Churchill Foundation.

Johal has been at Pomona since 2006 and his areas of expertise include surface chemistry, nano-materials, self-assembly and nonlinear optics. Johal’s research focuses on molecular aggregation and interactions within ultra-thin nano-assemblies. In particular, he is interested in how natural self-assembly processes can be exploited to create functional materials with novel biological and optical properties.