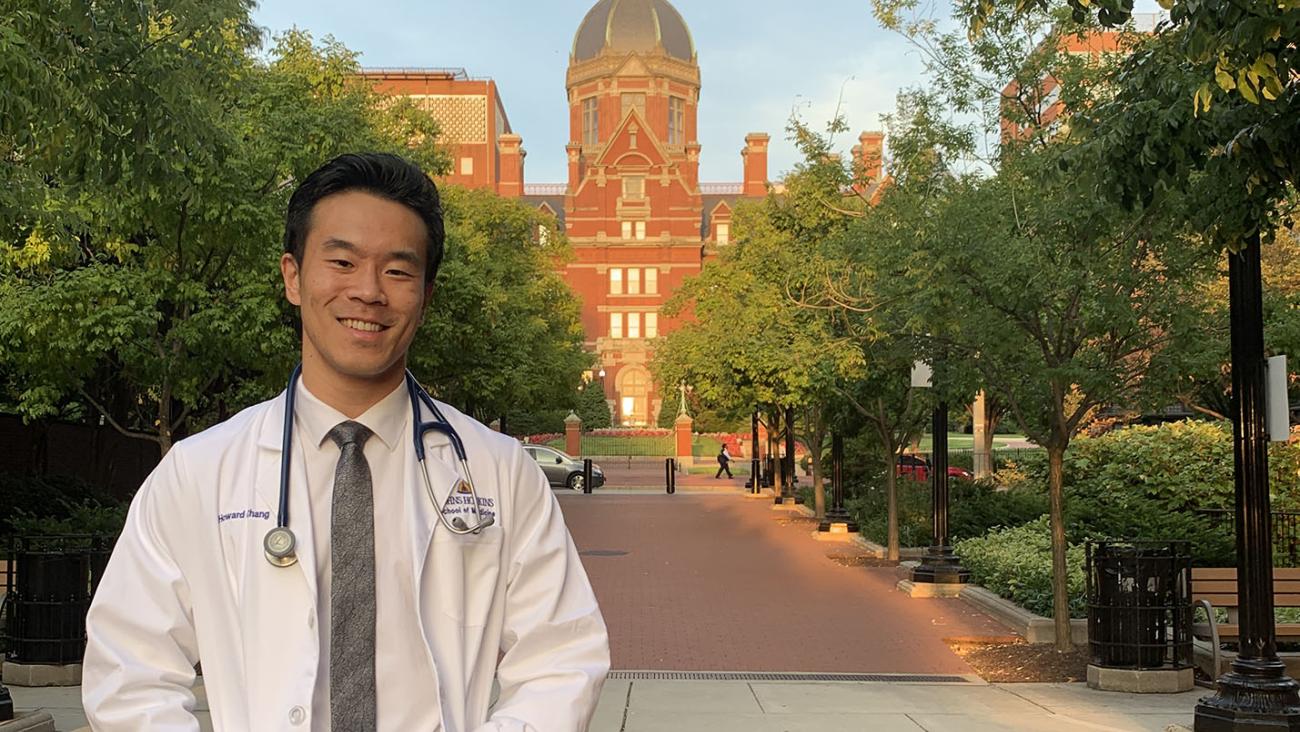 Story Date:
Howard Chang '14 in his white coat outside the Johns Hopkins University School of Medicine.

There will be no more

Among us, and only through

We will overcome this

So begins the poem “Social Distancing,” written by medical student Howard Chang ’14 and published in the August issue of the journal Academic Psychiatry.

The poem is not exactly as it first seems.

Through a format known as a reverse poem, Chang, who is entering his second year of study at the Johns Hopkins University School of Medicine, illustrates the diametric social forces our country is wrestling with in the face of the COVID-19 pandemic.

The first voice is one of defiant individualism, a person with the mindset, in the words of the poem, that “my freedom is more urgent than your safety.”

The second voice, only audible when the poem is read bottom to top, is very different, with the same three lines now reading “your safety is more urgent than my freedom.”

The overall effect is subtle and moving, stirring emotions in one direction and then soothing them on the return.

A molecular biology major at Pomona, Chang has increasingly explored his creative side while in college and now medical school.

“This ‘Social Distancing’ poem was probably only the second poem I’ve ever written—in my adult life, at least,” he says.

Back home in Cerritos outside Los Angeles this summer, Chang found an old school scrapbook that had a poem in it. “But beyond that poem in elementary school, this current poem and another one that I wrote actually very recently, I’ve never written poetry before,” he says. “So it was a really fun and new experience for me to play around with this creative part of my brain in this capacity.”

At Pomona, Chang was the managing editor of a student-run campus magazine that focused on the intersection between Christian spirituality and academic thought, the Claremont Ekklesia, which no longer exists in its original form.

Academically, Chang minored in religious studies, and he says many of those classes allowed him to explore his creative potential through papers he wrote. Two of his favorite courses were taught at Claremont McKenna, another member of The Claremont Colleges consortium, by Professor Stephen Davis. The classes were Philosophy of Religion and another called Life, Death and Survival of Death.

“In these two classes, you were given the opportunity to present a philosophical argument and to defend it,” Chang says. “That required a lot of critical thinking and position-taking from multiple perspectives. You have to be able to put yourself in the shoes of an opponent, and not only that, but to respond to opponents as well. I think that’s been very helpful for my other creative endeavors, including this poem.”

At Johns Hopkins, Chang has continued to write.

He contributes both to a blog on life in medical school, the Biomedical Odyssey, recently penning a guide for first-year medical students, and also to the Hopkins Panacea, the medical humanities magazine that published his first reverse poem.

“I knew that I wanted to contribute something to the Panacea, but what immediately came to my mind was in the genre of all the writing that I’ve done in the past, which was basically personal reflections,” Chang says. “So I thought, why not poetry? But having no experience in poetry at all, I wasn’t sure about how to do it stylistically, in the traditional sense. I just figured it’s hard to mess up if do you something unorthodox, like a reverse poem. There aren’t really any definitive ‘guidelines’ for how they should go.”

For his second reverse poem, he wanted to write about a current issue.

“What more visible topic was there at the time than the pandemic?” says Chang, who was still at Johns Hopkins on the East Coast when he wrote the poem.

“I think it was during the deepest part of the lockdown, where you could be given a citation if you left your home for non-essential purposes,” he says. “I just remember hearing and reading about so much opposition to these stay-at-home orders from people who felt like their freedoms and liberties were being taken away. It seemed to me that there were two opposing views that people had to what was going on. Clearly, you know where I stand on the issue. But I felt like it was more important to me to express creatively how I interpreted those who felt that their freedoms were more important than other people’s safety.”

And so unfurled the poem, like a wave of anger that, when read from bottom to top, recedes.

“The forward reading should be something that causes people to quiver a little bit. But after the reverse reading, they should leave with an optimistic and hopeful message,” Chang says. “You don’t want to end with something that is not hopeful.”

Because psychiatry is among the fields he is considering specializing in, he submitted the poem to a psychiatric journal. It was quickly accepted and after he posted his poem on Facebook, Chang says, the reaction overwhelmed him.

“I think it goes to show how much this message is resonating with people. I think that’s the important thing. It’s not about the fact that people read this poem and just liked it or thought it was creative, but that the message resonates with people. My goal is to get people to think harder about what it means to be ethical citizens at this point in our history.”

And so it ends, as read from bottom to top.

We will overcome this

Among us, and only through

There will be no more