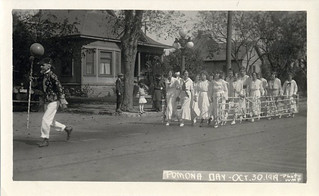 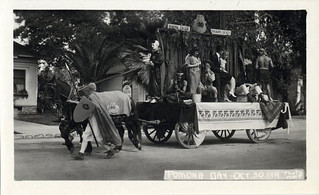 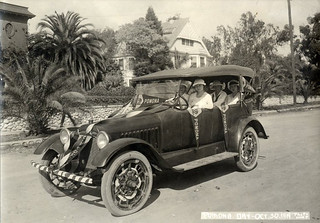 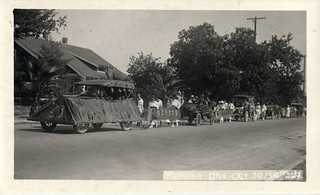 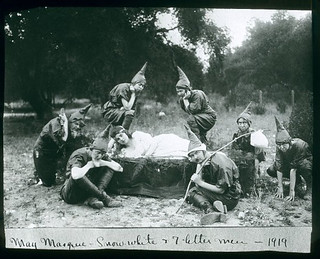 The primary organizing feature of Myron Hunt’s 1908 campus plan was a central quadrangle reminiscent of Thomas Jefferson’s much-admired design for the University of Virginia in Charlottesville (begun 1817). Like Jefferson’s quad, Pomona’s would be anchored by a library—Carnegie was newly completed—and flanked by buildings arranged on the north and south. With the quadrangle crossed by axes and vistas, Hunt created a serene garden environment to center the projected academic community. Founding Trustee and longtime Board Chair George W. Marston offered $100,000 to create and endow the central quadrangle. Work was undertaken in 1919, but the need to relocate Sumner Hall delayed the project, which was completed in 1921–22.

The conversion of the Student Army Training Corps barracks into the “Big Gym” was completed in March 1919.

In 1919, Professor Alfred Woodford 1913 received permission to teach the first geology class at Pomona. After he earned his Ph.D. in geology in 1922, the College established a separate Geology Department under his direction.

The 1920 Metate (published by the junior class in 1919) mentions of a tradition in which students emblazoned the “College Letter” on the hillside of the mountains above Claremont using flares during the big rally before the football game against Occidental, Pomona’s chief rival. Everyone attending the rally at campus down in the valley could see the bright “P” blazing on the hillside. This tradition continued for decades afterwards. In 1926-1927 school year, the Forestry Service prohibited the “lighting of the letter,” but in years afterwards a new agreement was reached and the tradition continued.

Photos in the 1920 Metate (published in 1919) depict students wearing face masks as protection against the Spanish Flu pandemic that swept the nation from 1918 to 1920.

A record enrollment of 685 students prompted President Blaisdell and the trustees to push a new campaign to raise money for the endowment and library, new buildings and campus improvements. The success of the “Three Million Dollar Campaign” led to the construction of Harwood Court, Mason Hall of Chemistry, Crookshank Hall of Zoology and the reconstruction and relocation of Sumner Hall. In 1923, the editor of Metate wrote, “men have dreamed of a greater Pomona. That dream is about to become a reality.”

The student body voted to grant the Pomona College athletic letter to women. It also agreed that the letter would be granted for men’s basketball, based upon the increased interest in the sport that year.

A regular newsletter for alumni, the College Letter, debuted in April 1919 near the end of World War I. The first issue contained stories on “Pomona Men at Presidio,” “War Work for Women” and “The Influenza.”