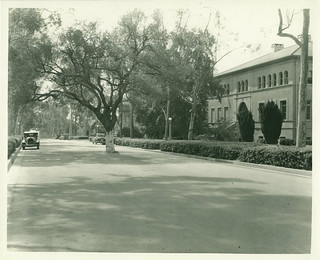 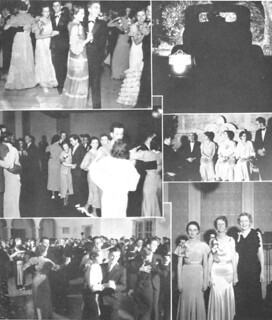 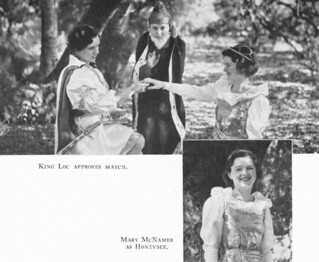 The 1934 Associated Women Students' May Masque, which was an adaptation from Anatole France's "Honey Bee."
7 years ago by Pomona College
Submit a Photo

In 1934, in the wake of the Long Beach earthquake of 1933 that damaged Bridges Hall of Music raised concerns about the strength of current structures, Pearsons Hall was rebuilt with funds provided by founding Trustee George W. Marston and others. By this date, Pearsons was dedicated entirely to physics, with Mason and Crookshank halls now serving the other sciences.

For the first time in the 1934 Catalog, the separate departments of French, Spanish and Italian were listed together as part of a single Romance Languages and Literatures Department.

In what may have been the College’s first organized effort to use the media to promote the College, the institution created a new department called the Student Publicity Bureau. The purpose of the new office was to “write and send out news releases about the more noteworthy activities of individual Pomona students to the newspapers of their various high schools, prep schools and junior colleges.”

Low Point of the Depression

As the Great Depression wore on, the decline in the Pomona’s enrollment and budget continued. In 1929, the Board had authorized the College to expand beyond its normal enrollment of 750 up to 800, but since then, the numbers had been falling and the College’s deficit had been growing. By 1934, approximately one-fifth of the population of California was on relief, and for many, a college education had become an impossible dream. That year, Pomona’s budget hit a belt-tightening low of $390,180. This was the Depression’s low point both for Pomona and for the nation, but after that date, as the nation began its slow steady recovery, Pomona recovered along with it.