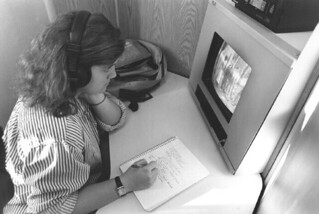 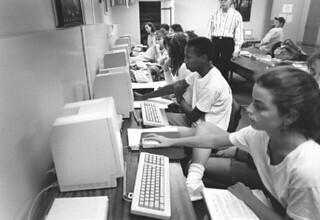 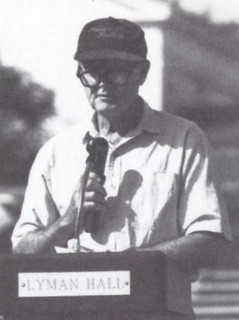 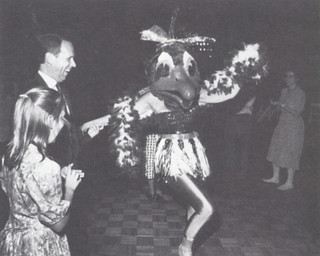 Rare appearance by Cecilia Sagehen, frolicking with President Peter Stanley and his daughter Laura, during Stanley's inauguration celebration on October 14, 1991.
7 years ago by Pomona College 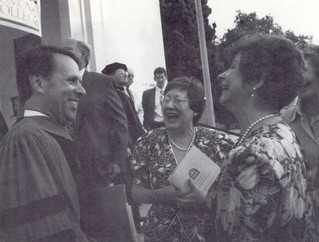 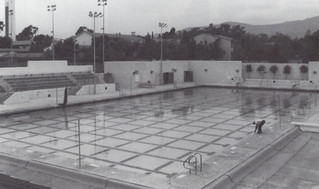 The Henry F. Haldeman Pool was dedicated before the 1991 opening swim meet with Amherst on November 24, 1991.
7 years ago by Pomona College 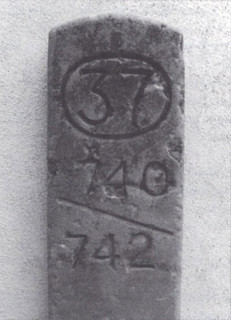 A mysterious stone marker found that indicated the northern edge of the Wash was permanently affixed to a wall on Sixth Street that surrounds the then-new Haldeman Pool in 1991. The marker was a combination milepost and address number, used in the 1800s.
7 years ago by Pomona College 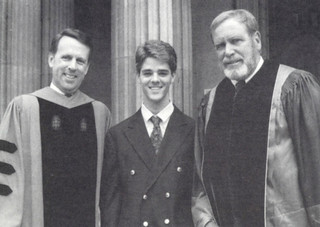 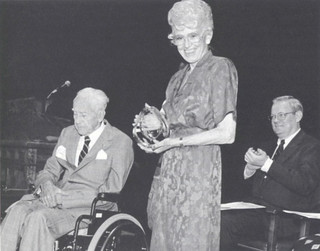 Mason Hill '26 received the first-ever Alumni Distinguished Service Award in 1991 during Wash I ceremonies on April 6, 1991.
7 years ago by Pomona College 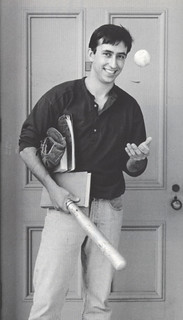 A summer 1991 Pomona College Magazine article featured Filip Sirovy '93, a Czech baseball player who defected from Czechosolvakia in 1989
7 years ago by Pomona College 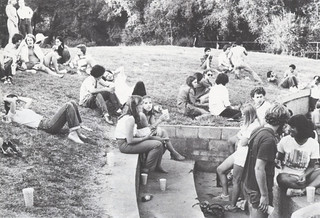 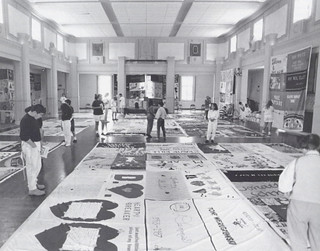 Viewing of the NAMES Project AIDS Memorial Quilt in Coop Ballroom on May 4-5, 1991. The Claremont Colleges community contributed to a fundraiser sponsored by the Student AIDS Awareness Committee
7 years ago by Pomona College 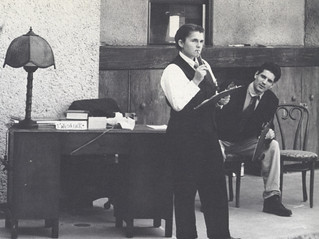 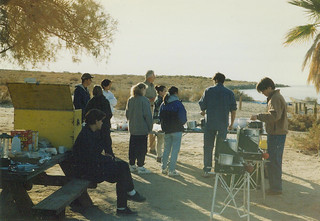 1991-salton-sea-field-trip
7 years ago by Pomona College 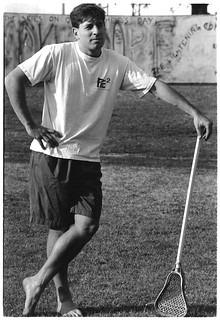 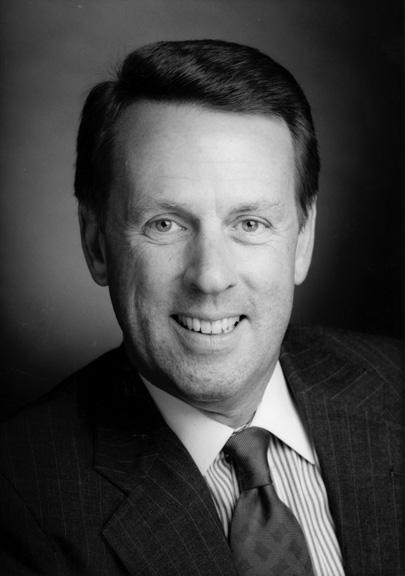 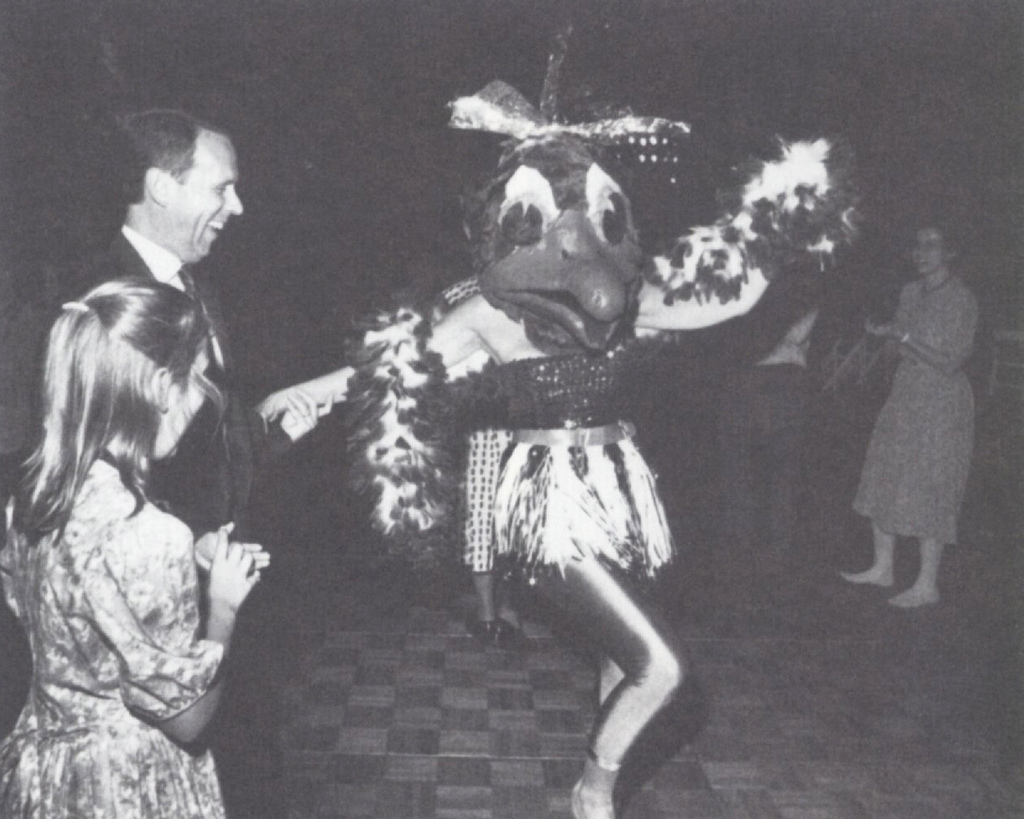 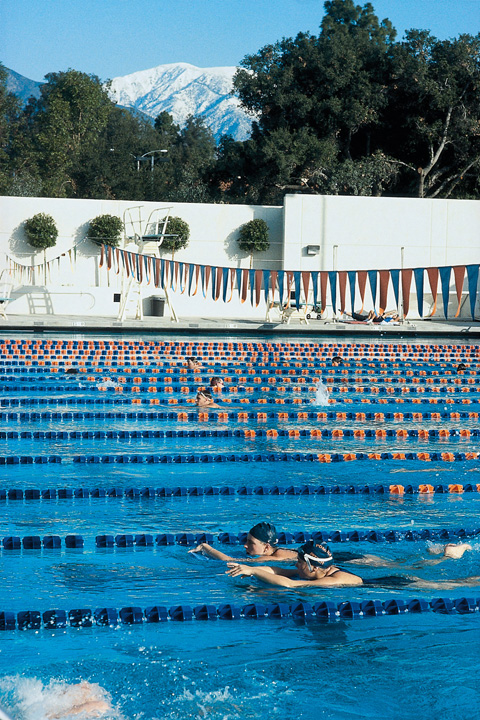 Pomona’s eighth president, Peter W. Stanley, came to the College from The Ford Foundation, where he had been director of the education and culture programs for the past seven years. Inaugurated in 1991 as the College’s eighth president, Stanley was, from the outset, sensitive to the role of the physical campus, an awareness that reflected, in part, the concern for heritage and regional identity fundamental to the ongoing nationwide historic preservation movement. In his inaugural address, Stanley noted the need for a campus center and pledged to see this goal realized. Dedicated in 1999, the Smith Campus Center was the most ambitious of the three important new building projects of Stanley’s tenure (the others being the Hahn and Andrew buildings) and one whose impact on the daily life of the Pomona community is particularly significant. Equally important, the building has, through its design, recaptured the spirit of Myron Hunt’s 1908 campus plan, opening north-south axes across Marston Quadrangle to Mabel Shaw Bridges Hall of Music and Sumner Hall, and creating an east-west corridor from Mason Hall to Rains Center.

The period of President Peter Stanley’s tenure was remarkable for the significance of the new buildings constructed and, equally, for the number, quality, and extent of renovations of older structures. That Pomona’s campus today bears a closer relationship to its historical roots than has been the case for many years is a tribute to the sensitivity with which new buildings have been designed and older ones restored to former glory while, at the same time, being upgraded to meet contemporary needs.

The growth of the campus during this period was closely tied to that of the endowment, which doubled between 1996 and 2002, ultimately exceeding $1 billion. This unprecedented increase was due in great part to The Campaign for Pomona College, endorsed in 1995. When formally launched in 1997, more than a third of the ultimate goal of $150 million was already in hand; by 2002, the campaign concluded 37 percent above its initial goal, having raised over $206 million and significantly met every program objective. A similarly impressive record was set in terms of applications for admission, which had set new highs in each of the five preceding years, as had levels of academic achievement of those admitted.

New and renovated classroom buildings reflected, as they enhanced, the College’s curriculum as it underwent important changes during this period. The relocation of the Pacific Basin Institute from Santa Barbara to the Pomona campus in 1997, and the introduction in 1998 of the Intercollegiate Asian American Studies Program, consolidated ongoing efforts to intensify Pacific Rim studies. In 2000, a new major in Cognitive Science was added to the curriculum as part of the Department of Linguistics and Cognitive Science that, as Stanley remarked, served to position the College at the forefront of the study of “the nature of mind and thought … that will only grow in importance as our century unfolds.”

During the summer of 1991, a new $3.1 million swimming pool, given by and named for Henry F. Haldeman, was added east of Rains Center, adjacent to Alumni Field. The Haldeman Aquatics Center has a 50-meter Olympic-size pool, one- and three-meter diving boards and separate locker and training facilities.

The first Pomona College Alumni Distinguished Service Award was presented to Mason Hill ’26, a retired geologist who played a key role in discovering some of the most important oil fields in the world, including Prudhoe Bay on Alaska’s North Slope.

– how the Internet and email first came to Pomona College? (1988)