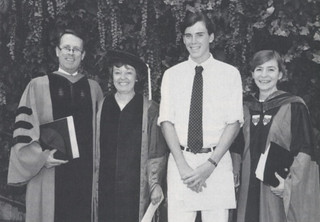 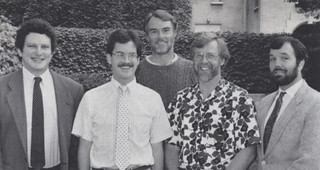 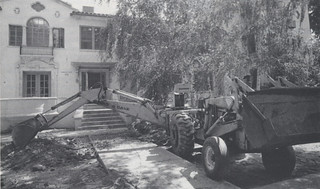 A $2.7 million facelift of Harwood Court included retrofitted bathrooms and widened entryways to make the entire first floor wheelchair accessible. This was among many accessibility projects on campus in 1992.
7 years ago by Pomona College 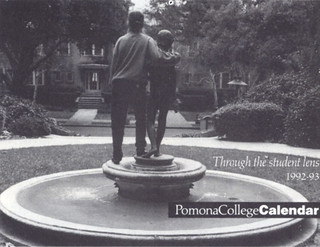 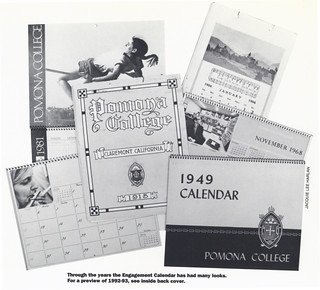 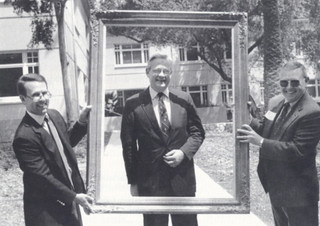 A good-natured pose is struck by President Emeritus David Alexander during the dedication of Pomona's Alexander Hall for Administration on April 25, 1992. President Peter Stanley and Vice President Ted Gibbens hold the frame.
7 years ago by Pomona College 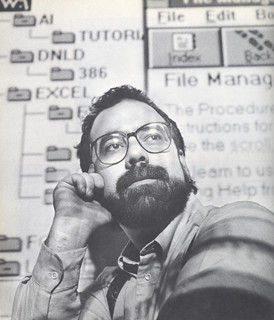 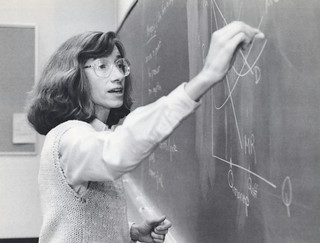 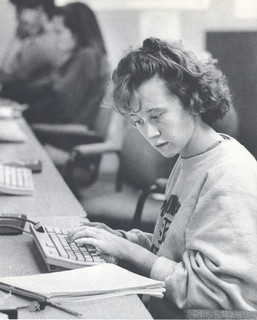 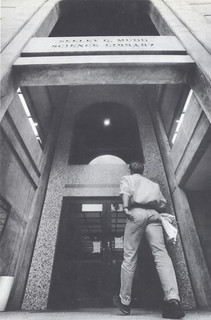 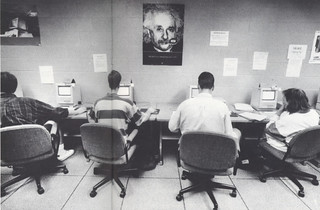 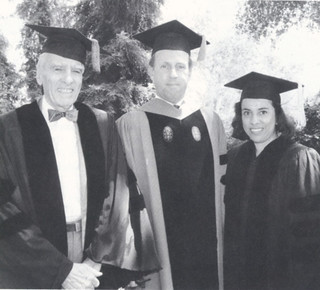 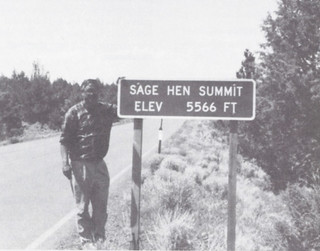 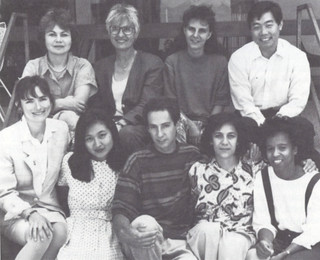 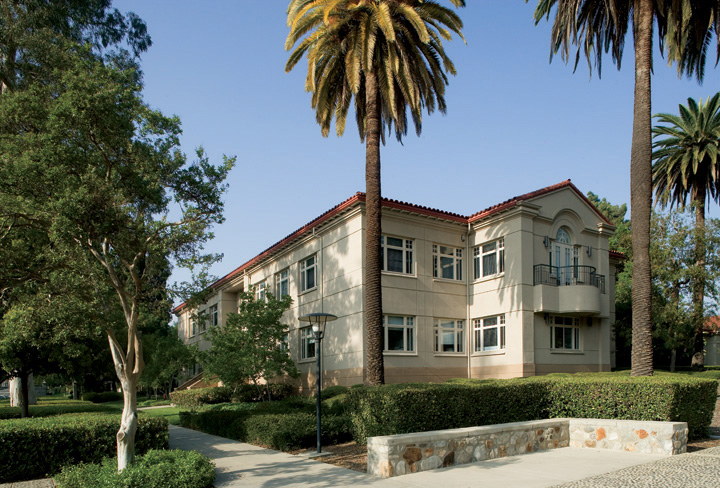 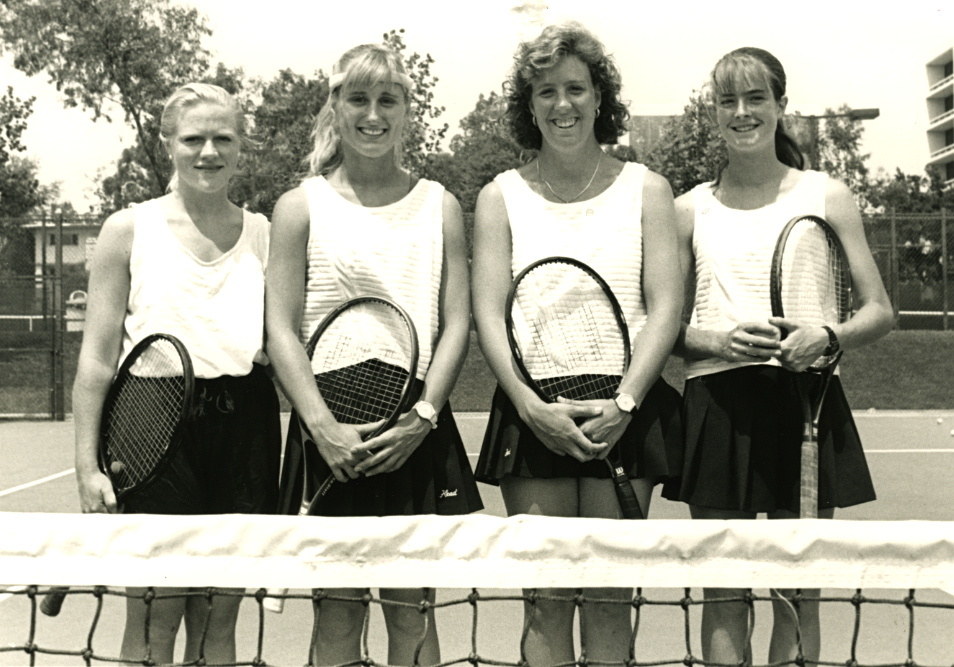 Pomona’s new 35,000-square foot, two-story administration building, Alexander Hall, was dedicated in April 1992. Over the years, the College’s administrative offices have been housed in a number of buildings—Sumner Hall, in its original location (1888); Holmes Hall (1893); Pearsons Hall (1898); Carnegie (president’s office, 1908); and the relocated Sumner Hall (1923). As the College grew, it became impossible to centralize administrative functions under one roof, and a new administration building was one of the chief goals of the Centennial Campaign.

When ground was broken for the new structure at the corner of Sixth Street and College Avenue in 1990, the building that had occupied that site for nearly a century—venerable Holmes Hall—was gone but not forgotten. Declared unsafe and impractical to renovate, Pomona’s first dedicated academic building had been demolished after a court fight that lasted years, but its memory left a mark on the new building, which was designed to fit Holmes Hall’s basic footprint (except for the one-story wing housing the Business Office) and to echo the tile and stucco appearance Holmes had presented to the world since its 1916 renovation. Likewise, many of Alexander Hall’s exterior details (entry steps, window patterns, sizes, and shapes) derived from Holmes, as did its traditionally appointed interior that includes chair rails, baseboards, paneling, and a central staircase whose metalwork detail and wooden banister mirror the one that served its predecessor.

Christened the David Alexander Hall of Administration, the building honored President Alexander’s 22-year tenure, which had concluded the year before the new building’s dedication.

Sumner House was closed as a dormitory in 1989 and carefully restored in 1992. Since then, it has served as the College’s guest house. The restoration was done by Claremont’s Hartman-Baldwin design company for $575,000 (the house cost $7,000 to build 1887). According to Claremont Heritage, the nonprofit organization that works to preserve the community’s historic buildings, Sumner House is the city’s only true Queen Anne Victorian.

Pomona College and the City of Claremont won the first round of a lawsuit brought by a citizen’s group called “The Committee to Save Our Village” in an effort to block the construction of Hahn Hall on a piece of vacant land owned by the College. Judge Robert Gustaveson threw out the part of the lawsuit that claimed that the College had no right to build on the property because it held title under a charitable trust for the benefit of the public. However, he ruled that the other part of the suit, which challenged the City’s decision to approve the project, would be tried separately. Eventually, the College would prevail, but the building would not be completed until 1997.

One of the most popular features of the rapidly expanding computing network at Pomona was the ability to use email. In an article for Pomona College Today, Everett Bull, associate professor of mathematics and acting director of academic computing noted: “I don’t think anyone foresaw e-mail’s usefulness and eventual popularity. What started out as a message system for sending electronic memos has evolved into a two-way communications system that has gained wide international use.” Added staff member Camille Peterson, “You get hooked on computers, and pretty soon you’re using them for all kinds for things you never knew were possible.”

Another Day of Infamy

To commemorate the 50th anniversary of Executive Order 9066, which led to the detention, relocation and internment of over 90,000 American citizens of Japanese ancestry, the College hosted a series of events at Pomona titled “Another Day of Infamy: Remembering the Japanese American Internment.” It included discussions by professors Leo Flynn, government, Richard Harrison, history, and Sheila Pinkel, art; a poetry reading by Garrett Hongo '73; a lecture by Brian Hayashi of Koroyo International College' and reminiscences by Itsue Hisanaga Yamaguchi '43, Mary Ochiai '41 and Alice Ochiai '50.

Professor of the Year

English Professor Martha Andresen was named the 1992 California Professor of the Year by the Council for Advancement and Support of Education and the Carnegie Foundation for the Advancement of Teaching. She was also one of three winners of the 1992-93 Robert Foster Cherry Awards for Great Teachers from Baylor University.

Bridges Auditorium stood in for the White House in scenes for the movie Dave, starring Kevin Kline and Sigourney Weaver, parts of which were filmed there in 1992.

With a 5-4 victory over Kenyon College, the women’s tennis team won the NCAA Division III national title, becoming the first Pomona team to win a national championship. Shelley Keeler ’92 won the national championship in both singles and doubles (with Erin Hendricks PI ’92) helping the Sagehens become the first NCAA Division III team to win the team title, the singles title and the doubles title in the same year.

Nate Kirtman ’92 became the first Sagehen ever chosen in the NFL draft when the Dallas Cowboys selected him in the ninth round. The Division III All-American led the nation in punt returns as a junior and was second in punting average. In addition to punting and returning kicks, Kirtman played running back, wide receiver and defensive back.

The Maastricht Treaty was signed, founding the European Union.

The acquittal of four police officers in the Rodney King beating criminal trial triggered riots in Los Angeles that resulted in 53 deaths and over a $1 billion in damages.

Pope John Paul II lifted the edict of the Inquisition against Galileo Galilei and issued an official apology.