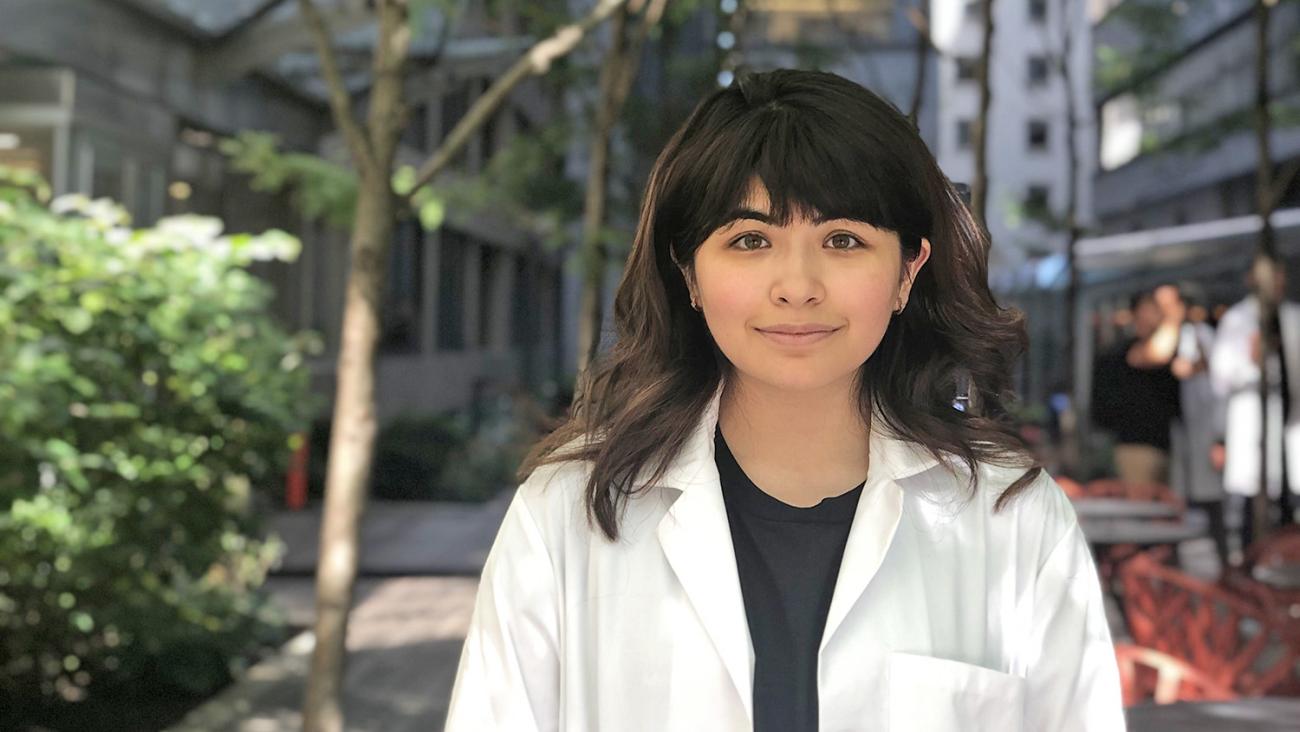 Ayleen Hernandez ’20 was just a child when she first decided to become a doctor – a goal that has kept her grounded as a student through high school and college. As a graduating senior at Pomona College, she’s one step closer to making that long-awaited goal a reality after receiving multiple medical school acceptances.

Hernandez received her first acceptance in October, and she knew what she had to do: “I called my mom even though it was midnight in Texas and told her ‘I’m going to be a doctor!’ My mom started crying with me and it was really emotional,” says Hernandez.

As the oldest of three children, Hernandez doesn’t just have experience being an older sister. She also has experience being a caregiver for one of her younger brothers. Alejandro, the middle child in the family, was born with severe autism and is non-verbal. He has depended on his big sister being there for him over the years.

“I have always been next to him, holding his hand in childhood so he wouldn’t run away, there to give him snacks when he was hungry,” says Hernandez of the special relationship with Alejandro.

As a child and teen, Hernandez became a bridge between her parents, who only spoke Spanish, and the healthcare system. “A lot of these experiences, I think, created this early desire to pursue this route and get my education and go into healthcare.”

Hernandez attended a large high school with more than 4,000 students in Katy, Texas, where her plan was not very different from many of her classmates: go to a state college after graduation. “It was an under-resourced school and our counselors would push us to go to state school, but I had heard about Pomona College from my friend – he was one year older—and had gotten into the QuestBridge program.”

She applied to QuestBridge, a national nonprofit that connects low-income youth with colleges and matches them with scholarships that cover the full cost of tuition, room and board. Hernandez admits she was a bit scared of going to a school like Pomona after hearing from her friend who was in his first year at Rice University. “I saw how much he struggled, he shared his feelings of imposter syndrome and I felt it was inevitable that I would feel that too.”

“Thankfully, Pomona has the awesome [academic] cohort program for first-gen, low-income, students. We take our intro science courses together, we go to the same mentor sessions, same labs,” says Hernandez, adding that the courses were difficult but the support from the cohort helped her excel in ways that might have been impossible at another school.

“I really attribute my academic success to the cohort program because it gives you a year to get acclimated and learn what your study skills are – which really levels the playing field,” she says.

Hernandez counted on a number of professors in the sciences whose doors were always open, including Biology Professors Clarissa Cheney and Sara Olson, and Roscoe Moss Professor of Chemistry Frederick Grieman.

“I had really good experiences in all of their classes – so it was either major in chemistry or biology,” says Hernandez, who decided to major in molecular biology because it bridges both fields. “It’s interdisciplinary and you can work with faculty from both departments.”

As a first-year student, Hernandez decided that she wanted to go straight to medical school after graduation, so that required connecting with the Pre-Health Advising program at the Career Development Office (CDO) at Pomona College and the Chicano Latino Student Affairs (CLSA) office at The Claremont Colleges Services to create a game plan.

As early as her sophomore year, Hernandez began studying for the MCAT.

The summer after, she interned at Houston Methodist Hospital where she worked on neuroscience and molecular biology research. The fall of her junior year, Hernandez studied abroad in England at University College London, where she did investigative work in a lab looking at super complexes in yeast. Most recently, the summer before senior year, Hernandez participated in the Travelers Summer Research Fellowship Program at Weill Cornell in New York City. Not only did she work in a research lab, but she felt empowered after meeting doctors from underrepresented groups.

As a junior studying abroad in London, Hernandez began working on her personal statement and the essays that would become the basis of her medical school applications. As part of the CDO’s Pre-Health Advising program, Hernandez was paired with an applicant committee made up of faculty and staff. The committee reviewed all of her essay drafts, provided feedback and helped her with mock interviews to prepare her for the real thing.

On top of that, says Hernandez, she had support from Dean Tony Jimenez at the CLSA, who also reviewed her essays and helped her understand the role she played in her family as that of caretaker to her brother.

When she found out about her first acceptance in October, her friends helped her celebrate: “They threw me a surprise pool party and a cake that read ‘Congrats future doctor!’ I got a lot of support. Professor [Sara] Olson even mentioned me at the start of class and introduced me as a future doctor – that was pretty cool.”

Since then, she has heard back from five more medical schools but is still waiting on two more. With the coronavirus (COVID-19) epidemic, Hernandez is weighing her options carefully before making a final choice.

“I definitely want to go to a school that values diversity like Pomona, supporting underrepresented students – whether academically and socially. Thankfully, I have seen that while on the interview trail. I also want a school that has a commitment to serving the underserved and makes an effort to reach those populations.”